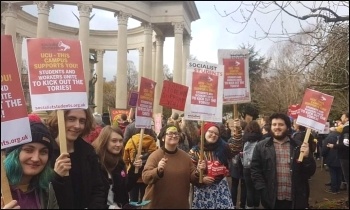 Attempts to scrap the support that Cardiff University Student Union had given the University and College Union (UCU) strike were roundly defeated on 10 March when Tory students couldn't even get enough students to turn up to an 'emergency members' meeting' to debate their motion!

Last November the Student Union annual general meeting voted to support action by the UCU by a sizable margin.

Lecturers and other university staff are fighting to end precarious working conditions at the university.

Despite the university claiming that they have no zero-hour contracts, some staff are teaching contracts that guarantee only two hours a year.

The university is also trying to cut pensions, and there are sizable gender and race pay gaps. As well as a workload issue that is destroying the lives of members of staff.

The Tory manoeuvre tried to cancel our democratically-agreed support by calling a vote when many students had gone home rather than cross picket lines trying to overturn the will of the students to stand in solidarity with the staff who teach us.

But not only did it fail - it backfired!

Socialist Students, 'Cardiff Students Support the Strike' and other groups have been out campaigning for students to continue and step up their support.

Lots of people are outraged by the Tory plot, and their passive support for lecturers and other university workers has turned into active support.

Joe Healy, from Cardiff Socialist Students and Students Support the Strike said: "It was pathetic, really.

"The Tories spent weeks trying to rally people to attend but it was obvious what was going to happen.

"Their petition calling the meeting was deliberately vaguely worded, and students have now realised that they were tricked into supporting a sly attempt to undermine our pro-strike stance.

"Students are happy with the current position: we support our staff in their fight for better conditions for all of us.

"This isn't over, but we're prepared. We said in November and we'll say it again: this is a joint struggle: students and workers together, and we know that."

Cardiff West Socialist Party: The need for a revolutionary party