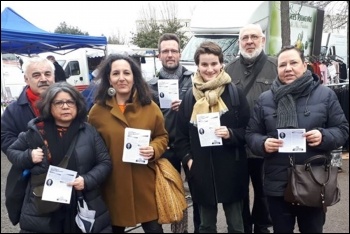 On 15 March, Leïla Messaoudi of Gauche Révolutionnaire (GR, the Socialist Party's sister organisation in France) was elected to the local council of Petit-Quevilly in the city of Rouen, where she has lived for 14 years and worked for 23 years. Leila was elected with 338 votes (8.4% of the votes cast, on a low 32% turnout).

Controversially, the first round of local elections was held on the Sunday immediately following president Macron and the French government's decree severely restricting the movements of the public, and closures of shops, businesses and public amenities.

Unsurprisingly, the overall turnout was historically low but this did not stop Macron's party being hammered in the polls. The second round scheduled for 22 March has been postponed until 21 June.

The electoral list 'Décidons (Let's decide) Petit-Quevilly', supported by France Insoumise ("France unbowed" - the party led by former left presidential candidate and current deputy in the National Assembly Jean-Luc Mélenchon) gathered 35 people and was created thanks to a campaign led by members of the local group of France Insoumise - that GR has been helping build for three years.

The list was created with trade unionists, workers and community activists, who supported and joined a campaign genuinely at the service of the rights of workers and ordinary people.

The campaign opposes, on a local scale, the consequences of President Macron's anti-working class policies.

But it is also opposes those of the pro-capitalist (misnamed) 'Parti Socialiste' (Socialist Party, PS) majority which runs the Rouen area, and has been pushing similar policies for 30 years.

Closure of public services like some public hospital services, abandoned and substandard social housing, destruction of green space for the profits of capitalist multinationals in the building industry... all these have had a great impact on the daily lives of the workers.

The health scandal - and the scandalous policies of the government and local elected officials after the fire at the Lubrizol chemical plant in Rouen last September - was one of the topics of the campaign.

Nationalisation under the control of the population and workers in dangerous factories was one of the demands of the list.

The list carried out a dynamic door-to-door campaign, participated in the latest day of strikes against the government's pensions attacks, and did a whole weekend of protests and actions on 7 and 8 March.

In the previous elections in 2014, the workers and the population had no other choice than a PS vote against the far-right National Front (FN).

This time, thanks to our presence, the FN remained second but did not campaign and lost 10%, going from six to four seats.

This allowed the PS-Communist Party-Green list to be elected with a majority in the first round.

But now, a militant collective has been born in the city, ready to organise local struggles for the right to decent housing, for the cleaning-up of polluted areas, and for the reinstatement of public services that have been closed down or privatised in recent years.

Around "Décidons Petit-Quevilly", local resistance and solidarity are being organised in the face of all austerity policies, whether they come from Macron, or the PS majority.

It also gives impetus to all those who understand the need for a mass political force against the capitalists, against the parties that serve them and against Macron.