Ian Pattison gives the BBC TV series the thumbs down, but recommends the original book 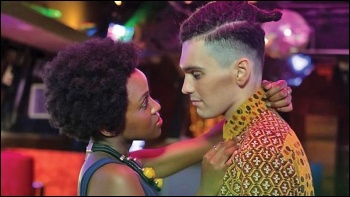 The BBC TV series is weak politically, but it still manages to invoke the wrath of the right-wing media, photo Noughts and Crosses (BBC)   (Click to enlarge)

Noughts and Crosses is a world turned upside down. Hundreds of years ago Aprica (Africa) invaded Albion (Britain and Ireland).

Today in Albion, a black minority elite rule over the majority white population. They employ segregation, discrimination, police brutality and poverty. The 'noughts' are white people and the 'crosses' black.

Reviews in the Daily Mail and Sun said the show's anti-racist message is out of date and exaggerated.

They're wrong. It's no surprise these right-wing establishment mouthpieces don't understand how to use larger-than-life alternative history to make a political point.

In reality, black people in Britain are twice as likely to be in poverty than white people. And 40 times more likely to be stopped and searched by the police.

In the TV series, one white character has been stopped by the police 300 times.

In the real world, the ruling class and the working class are made up of different races. The former uses racism and other tools to keep the latter divided. Some of those nuances exist in Noughts and Crosses.

For example, a white dock worker asks for time off for a colleague from his white boss. He appeals for solidarity based on the colour of their skin, "you're one of us."

But no poor black people. Reversed, that's not how society is set up.

Noughts and Crosses was originally a book. I read it when I was younger.

There are a few ways the plot benefits from a TV adaptation. It is interesting to see London dominated by African architecture and clothes.

The white characters that are deferential to the ruling class wear more African clothes.

But on TV, the magic and politics of the novel is lost.

In the book, initially you don't know what the characters look like. Only after a rant from a racist character, does the premise become clear. That device is missing in the adaptation.

The teenage protagonists are replaced with young adults. They're lovers from different races, their relationship is banned.

The consequence? A naive couple who grow up to despise the racism in society are replaced by stupid adults, wilfully ignorant of the prejudices around them.

The book plays a positive role. It makes you think society can change, that's there's a political solution to ending racism.

But the TV incarnation replaces that with a random hope for love. The political conclusion is dropped.

All this serves to dampen and dilute what could be a useful tool to tell a vital message.