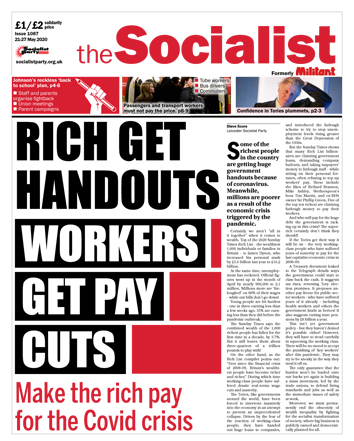 Fiction: The Jungle by Upton Sinclair 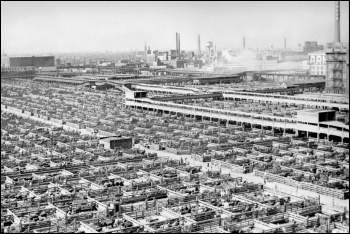 Meat packing in the early 20th century   (Click to enlarge)

Upton Sinclair, in his book The Jungle, described the meat packaging factories in Chicago in 1906 in the following way: "It was the incarnation of blind and insensate Greed.

The free market of America in the late 1800s and early 1900s wasn't free. It was controlled by a handful of corporations which conspired together to set prices and wages, and smash the rising labour movement - under the comforting name of the 'Trusts'.

The so-called free market meant that the Trusts were free to employ children in factories; free to make people work 60 or 70 hours a week; free to pollute rivers and streams; to hire private armies and to bribe; free to sell what they wanted at whatever price they liked.

The exploitation of the working classes grew - creating a dramatic increase in the gap between rich and poor.

Upton was not primarily drawn to write The Jungle out of concern for the horrible contamination and corruption of meat that workers consumed and fed to their children.

His main concern was the horrific condition of meatpacker workers following the failed strike of 1904, when 18,000 union members in Chicago walked off the job to win higher wages.

Upton met, and was inspired by, socialists to become an activist in the rising socialist movement. He joined the newly formed Workers' Party at the age of 26, and sold the rights to a book on the conditions of workers in the meatpacking industry to the editor of Appeal to Reason, a socialist weekly newspaper.

He travelled to Chicago to do research for the book, and lived among the meatpacking workers. There he met Adolph Smith, a founder of the Social Democratic Federation in England, who influenced Upton's socialist conclusion to The Jungle.

For seven weeks he eats with the meat packers, breathes the same air, and lives with them in squalor - all in preparation for his book, which follows the Lithuanian immigrant Jurgis and his family who come to America yearning for a better life.

The book was first published in instalments in Appeal to Reason, boosting the papers circulation to 175,000.

But the book was rejected by five publishers who were fearful of its powerful socialist message.

However, with the backing of activists in the socialist movement, including the famous author Jack London, he raised $4,000 in advance sales, and as a result the book was finally published.

Upton's descriptions in the book of rampant disease, absence of health and safety protection, violence, prostitution, alcoholism, drug addiction and the desperation of children driven to work in all weathers under poisonous conditions to help their parents cover the costs of shelter, warmth, clothing and food, are incomparable.

The Jungle was an immediate success, allegedly causing President Theodore Roosevelt to choke on his breakfast and turn vegetarian after reading an advance copy.

The Jungle's graphic account of the presence of chemicals, diseased meat and rodent excrement in sausages incensed the president who decided to call for an investigation into the meatpacking industry.

This resulted in two important pieces of legislation: the Pure Food and Drugs Act and the Meat Inspection Act which, were passed in Congress.

However, Upton was disappointed by the impact of The Jungle which had been written to help meatpacking workers rather than improve the quality of meat.

Upton later wrote: "I aimed for the public's heart, and by accident hit it in the stomach".

Mass queues for work, strikes and scab labour all figure in this book. But the remorseless demands of capitalism are the same across the world.

Ben Tillett, the dockers' leader in England, described the 'call-on' of workers desperate for work in the docks in the late 1800s: "We are driven into a shed, iron-barred from end to end, outside of which a foreman or contractor walks up and down with the air of a dealer in a cattle market, picking and choosing from a crowd of men who, in their eagerness to obtain employment, trample each other under foot, and where like beasts they fight for the chance of a day's work".

This is similar to the sight that confronted Jurgis when he started work at the meatpacking plant in Chicago.

The conditions in slaughterhouses gradually improved for meatpacking workers in the years following The Jungle, because workers organised in unions and fought to improve their lives.

By the late 1930s, most of the industry was unionised. And by the mid-1950s, meatpacking workers had one of the highest-paid manufacturing jobs in the United States.

However, once again under the dark cloud of Covid-19, low-paid migrant workers are being forced back to work in the meat processing plants where high rates of infections are reported.

The United Food and Commercial Workers International Union (UFCW) reckons that 72 workers have died and 5,322 are directly affected by Covid-19.

The result is that workers are afraid to return to work, with reports that some plants have slowed production or closed because of worker 'absenteeism' amid legitimate fears of infection.

Among the closures is the Smithfield Foods pork plant in Sioux Falls, South Dakota. Some 853 of its 3,700 employees were infected with the coronavirus, resulting in indefinite closure at the request of state and local officials.

But a leap of imagination is not necessary to see the similarity of the hand of capitalism in the vast business empires of the couldn't 'care' less homes like HC-One. With 300 UK care homes, only one in six of its staff were tested for Covid-19, and one in three of its residents

According to the Health Foundation: "In the week ending 1 May 2020, there were 2,423 COVID-19 related deaths recorded in care homes, 3,214 recorded in hospitals and 254 recorded in private homes."

Where are the books written about this army of care workers, many from immigrant families, desperate to pay rent, feed their families and find transport costs to and from work? The workers who are heroically looking after our parents and grandparents in their old age, many of whom are infirm and now sick with Covid-19?

Sinclair's harrowing descriptions of the degrading, filthy, dangerous, exploitative and near slave working conditions in the meatpacking factories in the early 1900s - conditions that are being replicated in workers lives today - will drive you to fight for workers' rights and socialist change.

I challenge you to read Upton Sinclair's masterpiece and walk away untouched by the mental pictures he weaves.

But beware, this is no book for the weak of heart, it will burn in your memory till your memory is no more.