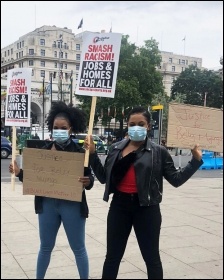 Protest in solidarity with George Floyd, murdered by the police in the US. 3.6.20, photo Sarah SE   (Click to enlarge)

It was only after widespread anger erupted that one of the sacked police officers involved in the killing was charged, sending a message to many that justice will have to be fought for.

The US protests have spread internationally, with thousands marching through central London to the US embassy on 31 May, and more protests being planned throughout the UK.

In US cities, peaceful protesters have been fired on by police and National Guard using rubber bullets, tear gas and flashbangs, in an attempt to make people disperse. None of this has deterred protests from taking place.

Donald Trump has also addressed these anti-racism protesters very differently to the recent gun-toting, right-wing, mainly white, "reopen" protests opposing lockdowns to control the spread of coronavirus. Then, Trump called on this right-wing armed rabble to "liberate" states controlled by his political opponents. Now, he tweets in favour of the military firing on the anti-racism protesters who he describes as "thugs".

In the middle of this pandemic, with people adhering to strict lockdowns imposed by states to save people's lives, it is stark that a black man would then be killed in the street by police.

As the health and economic crisis deepens, it's the poorest, working-class areas which are hit hardest, along with the chance of any sort of decent future.

A new wave of struggle could grow out of these protests. Such a movement would need to take up both the issue of justice for those killed at the hands of police and the wider issues of poverty, inequality and oppression.

Already there are the beginnings of solidarity actions by trade unionists in the US - there have even been reports of some police refusing to curtail protests! All this should be built on.

By forging a united working-class movement with a fighting socialist programme, it will be possible to challenge the rotten system of capitalism in which racism, oppression and exploitation are rooted.

"Young people of all colours and nationalities are saying 'we've had enough of racism, injustice, discrimination, poverty and bad conditions'. It's the profit system which has cemented racism into its foundations. Therefore, the only way to end racism for good is to fight to end capitalism and for a socialist society. And the only force in society that can make that change is a united working class."
April Ashley (Unison union national executive council black members seat, personal capacity, and Socialist Party BAME group)

"Covid-19 has exposed the inequality of US capitalism in the way the virus has disproportionately killed black and poor people - an indictment of the richest country on the planet. As Malcolm X once said: "You can't have capitalism without racism". We have to protest on the streets and reclaim them from the racist police. But we must also come together to plan how we end capitalism and fight for socialism."
Hugo Pierre (Unison union national executive council, personal capacity, and Socialist Party BAME group and national committee)