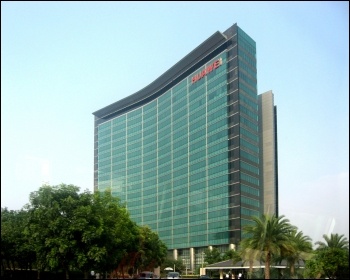 Boris Johnson has made a u-turn on Huawei's 5G internet technology - announcing a ban on new use from 31 December, and a total phase-out by 2027.

Donald Trump took to Twitter to boast of his role in having "convinced many countries," including the UK, to ban Huawei. Oliver Dowden, the secretary of state for digital, culture, media and sport, acknowledged that Trump's block on Huawei using US-manufactured components had changed the situation.

Pressure has been exerted by British capitalism's allies in the 'Five Eyes' international intelligence network, such as the US and Australia - which Johnson wants to strike quick trade deals with following Brexit.

Behind Johnson's decision is world capitalism's growing polarisation into competing blocs, with the two main trends led by the US and China. Smaller capitalist powers, especially declining British capitalism, are having a difficult time trying to navigate a middle position between the two.

Substantial sections of the Tory party have opposed deepening Chinese investment in strategic sectors of the British economy.

The most hard-line fringe elements of the Tory party imagine they can recapture British capitalism's lost imperial past. But opposition also includes Tory establishment grandees like Chris Patten, former party chair and governor of Hong Kong, who had been urging a change of attitude towards China.

The 'China Research Group' was formed by mostly backbench Tories in April. It is somewhat modelled in the image of the right-wing Brexiteer 'European Research Group'- but contains substantial numbers of more establishment Tories too.

For example, Damien Green, Theresa May's former number two. His concerns link to unease about the role of the Chinese state in Chinese companies, security of British strategic assets, and being out of step with Five Eyes allies.

After this victory on Huawei, the China Research Group has already announced its next target: China's involvement with the nuclear industry, another strategic sector.

But u-turns like this will have consequences for the capitalists and their politicians. China is British capitalism's third-largest trading partner, after the EU and US, accounting for 5% of all trade. And Dowden has suggested the ban will delay the introduction of 5G by two to three years - at an extra cost of £2 billion.

Increased tensions put British firms with significant trading relations with China in a more difficult position too, as the most likely to face any Chinese retaliation. British banks Standard Chartered and HSBC make half and two-thirds of their profits respectively in Hong Kong and China.

Both have decided to support the draconian new Hong Kong security law which gives the dictatorial Chinese state more powers to intervene there. Meanwhile, Johnson's (hypocritical) response has been to extend citizenship rights to many Hong Kong people, and move to suspend the UK's extradition treaty with Hong Kong.

It is not just British capitalism that faces difficult decisions around this issue. Angela Merkel, German chancellor, has to come to a decision on Huawei's 5G involvement in the autumn. Her Christian Democrats are split on the issue like the Tories here. However, Germany is already more integrated with China, both in regards to telecom technology and trade more generally.

Some capitalist commentators have latched onto the lengthy implementation dates as preparation for a possible further u-turn if Trump is forced out of office in the forthcoming presidential election.

As the Financial Times comments: "Some in Washington are privately concerned that the UK move to set a December deadline was chosen in the hope that Joe Biden, the Democratic presidential nominee, would beat Mr Trump in the November election and take a softer stance on Huawei."

But it would be wishful thinking on the part of British capitalism to imagine there is any way Biden can have the US, the biggest but declining imperial power, avoid confrontation with the rising competition from China.

As we commented back in January: "What the saga shows is that there is no plain sailing for the Tory government trying to navigate the trading seas post-Brexit in an increasingly volatile period for world relations."