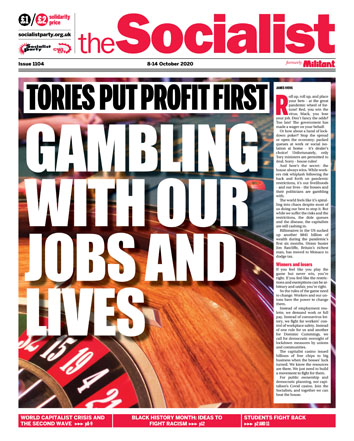 'Why I no longer talk to white people about race' by Reni Eddo-Lodge, written in 2014, is a personalised, honest and thought-provoking read about racism in Britain. Reni gives ample examples, backed by statistics, of the unshakeable truth that institutionalised structural racism exists in all aspects of the lives of black and Asian people in Britain.

This review looks at the 2017 updated edition. Since 2014 we have witnessed the election of Donald Trump and the rise of populism and far-right parties in European elections. These events, together with the war in Syria, the peak of the refugee 'crisis', the sad tragedy of Grenfell, and the huge support for Jeremy Corbyn's policies, have changed the discussion in Britain on the question of race (and other issues).

If the book had been written this year, it might have had a different viewpoint and emphasis. We are living in a period of sharp turns and sudden changes, where huge events are taking place. The Covid pandemic and the current economic crisis have sharply exposed the class and race inequalities that exist within capitalism.

The global movement around Black Lives Matter saw tens of thousands of young people, of all backgrounds, coming together to oppose racism and to fight against injustice. That is the music of the future - a glimpse of what is possible.

In this situation, Reni's book can be used as a tool for discussing the different ideologies on the essential question facing us today: How do we end racism? What is the force in society that can end it? And how can we unite those experiencing exploitation and oppression?

It's not just the cover of the book that is black and white. In summary, the author also sees racism as a black and white question. She repeatedly explains that she doesn't want white guilt, and that the term 'whiteness' is used in a political context rather than being an attack on all white people, but that is, in fact, what the book does. She identifies the problem as the system, but that system for her is white middle-aged men.

Given the history of imperialism, slavery, and the fact that the system is run, in the main, by white men, it is understandable why she might draw that conclusion. But racism is embedded in the economic and social system we live in, and that system has a name - capitalism.

Capitalism is a system based on the exploitation of workers; a system that is oppressive and discriminatory, and divides us on the lines of race, gender, sexuality, etc, in order for profits to be made from our misery.

The first and largest chapter of the book deals with Britain's history of racism and the conditions faced by black and Asian people now. What's missing from this chapter is an analysis of the root cause of racism. And it also omits a big chunk of working-class history, and the role the trade union movement played in fighting racism in Britain.

The 1963 Bristol bus boycott, for example, pushed management back and forced the trade union leaders at the time to take on the issue of fighting racism.

In May 1993, just a few weeks after Stephen Lawrence was murdered, over 8,000 joined a demo called by Youth against Racism in Europe and other organisations. Mainly local young people, black and white, marched past the headquarters of the British National Party (BNP) demanding that something be done to rid the area of these racists. Within two years the BNP's headquarters had been shut.

Reni mentions that history is written by winners, but who are these winners? It is those in power, the handful of billionaires who control the majority of the wealth and resources in the globe. It is the interests of the economic system which they control that have dominated history books and the education system.

It's often not just black history that is not sufficiently taught in schools, but the history of the working class in struggle.

Capitalism is a system in crisis. The rights and gains won by the working class are under constant attack by the ruling class, and the working class will struggle to improve their living conditions. The fight against exploitation and oppression is not going to go away. Neither are the capitalists going to give up power voluntarily. To maintain their rule, they use all the tools and institutions of society to redirect anger and blame against minorities.

We are influenced by what we see, hear and read - most of which is owned by the capitalist media. Anti-migrant propaganda, for example, can have an impact on social attitudes, including those of black and Asian people who are genuinely concerned about the impact on insufficient local services.

Reni uses the term 'scarcity mentality' - but that is precisely what the ruling class wants people to think: it's not us, blame them - the migrants. However, the solution to lack of resources is not to blame migrants, but to unite and fight for an increase in investment. There is enough money available to provide services for all who need them - as the pandemic has shown.

The advantage of being a socialist is to have a Marxist understanding of the development of class, capitalism, the root cause of racism, and how to end it. The book and the author lack this analysis and perspective. As a consequence, the argument as to why racism exists is constrained by the framework of capitalism. This leads to a conclusion which ultimately blames whiteness, and promotes privilege theory and identity politics.

These are raised thoughtout the book. As Marxists, we understand the multiple oppressions that exist in society. People are oppressed on the basis of class, race, gender, etc. But the source of all oppression is rooted in class-based society, of which capitalism is the prevailing system.

As Malcolm X said, "you can't have capitalism without racism". We need to build a united mass working-class movement to fight racism and capitalism.

Black and Asian people face many barriers and disadvantages because of the colour of their skin. The use of language such as 'white privilege', however, can be very divisive and cut across the unity that is precisely needed to end systemic racism.

Black and Asian workers have been disproportionately affected by the economic crisis of 2007-08 and the current one. But the working class as a whole has been hugely affected. A white working-class person struggling to make ends meet, affected by cuts to services, low pay, the housing crisis, the underfunding of our NHS, and the lack of job prospects, will not feel that their whiteness brings them any 'privilege'.

For capitalism to survive it needs to exploit and oppress all working-class people, and it is the capitalist class that derives the material advantages and privileges from that. Reni herself points to the opportunities of the rich in the chapter on class and race.

She says that we can't wait for unity to happen. That is true. But individual action such as talking to different people about racism in your workplace and social circle is not going to get rid of racism. For that to happen we need to build a mass movement on a far larger scale than the BLM movement. That needs to be linked with the workers' movement on a class programme which includes pay rises, housing for all, free healthcare at the point of use, and public ownership of the large industries which dominate the economy, based on the democratic control and management of workers themselves.

For a fundamental change in the system, we need to take the power from the ruling class: that means a revolution to overthrow capitalism involving a united working-class movement. That's how we can end not only racism but all discrimination - replacing capitalism with a socialist society free from exploitation and oppression.