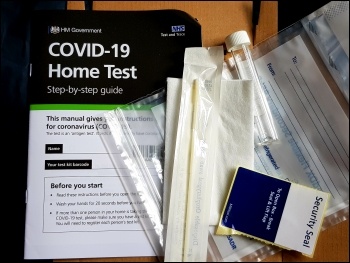 Covid-19 infections are spreading fast because England's 'test and trace' reached only 60% of the contacts of confirmed Covid cases in recent weeks. That compares with 97% of contacts reached by local public health departments.

The results keep getting worse as the number of positive cases rise. Although Scotland, Wales and Northern Ireland all have problems with their systems, they get better results than the privately-run English system.

Branded as 'NHS Test and Trace', most of the money goes to private contractors, including Serco, Sitel and Amazon. It uses the NHS logo, but is not linked to existing NHS organisations.

Calls from its 0300 number get answered far less often than if made from a local number. The caller could be at the other end of the country, making it harder to win the confidence of the person being called.

Finding out from someone with a positive test who they could have passed the virus to is just the start. These contacts must be called to tell them to self-isolate for 14 days.

Many need proper support to do so - full pay, practical and sometimes mental health support. But only those on the lowest incomes qualify for the inadequate £500 payment.

Local GPs, who know their area and those most at risk, didn't get results at all at first. Now they do, but without information on why the test was done, whether the person has symptoms or anything else that would help them interpret the result.

Laboratories testing for infectious diseases used to notify results to local public health departments for contact tracing. One of the last acts of the Gordon Brown New Labour government in 2010 was removing this responsibility.

Positive test results have soared since 'Eat out to help out', schools and universities returning, and autumn weather driving people indoors. This was all entirely predictable, but test and trace seemed unprepared.

They're expected to handle calls to people who may be struggling with serious Covid symptoms or who have a close relative who has just died - while working alone at home. This is the "world-beating system" Boris Johnson boasted he was setting up in May.

This chaos is run by Tory peer Dido Harding, herself married to millionaire Tory MP John Penrose, who claimed "chaotic parents" were responsible for children going to school hungry.

Not a penny more to Serco and other profiteers. Nationalise them without compensation, except to small shareholders in genuine need, so local health workers and communities control track and tracing. Full support for those who need to isolate.