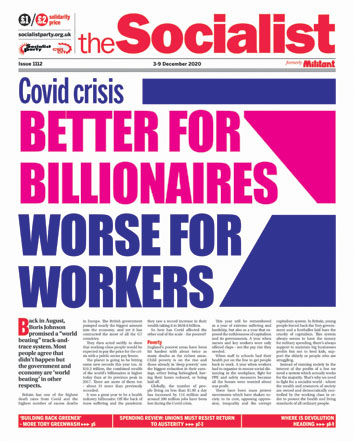 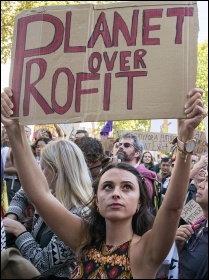 The Tories announced on 17 November their ten-point plan to tackle climate change, and reach a net-zero emissions target by 2050. But Boris Johnson's pledge to "build back greener" - post-Covid and post-Brexit - is just so much 'greenwash'.

As if to underline that, Johnson's Chancellor Rishi Sunak, in his spending review, reaffirmed his commitment to an extra £27 billion on expanding the road network. That means more cars, vans and lorries pumping out more CO2 and toxic pollutants into the air.

The ten-point plan announcement is in advance of the government hosting the COP26 climate summit in Glasgow next year, which is likely to see big protests over the lack of progress among world governments, including the UK's, in halting climate change.

In response to the detailed policy document, released a full day after Johnson's public announcement and the media fanfare, the Financial Times, citing climate experts, reported the plan is a 'far cry' from what is needed to reach net-zero emissions by 2050.

There was little mention in the media of the savings only closing 55% of the gap needed to meet the government's own 'legally binding' targets. In reality, these measures have no chance of delivering zero-carbon emissions by 2050.

The Tories have claimed there will be £12 billion of investment and the creation of over 200,000 new jobs, but this is another deception. At most, there is £3 billion of new money - a drop in the ocean of Covid-related funding and, moreover, the funding required for the transition away from polluting fossil fuels.

According to the Committee on Climate Change quango, achieving a net-zero carbon economy by 2050 will cost £30 billion each year - a sizeable sum. But the cost of not doing so will be greater and, in total, it is roughly equivalent to the £900 billion in quantitative easing that governments have shelled out over the last decade to keep the capitalist economy afloat.

The £3 billion includes £525 million to build a new generation of smaller nuclear reactors at the very moment Germany is phasing out nuclear energy because of the huge public health risks, the risk of accidents, and storing the waste which remains radioactive for thousands of years.

Nuclear power will need to form part of the economic transition but decommissioned on a 'just' basis under democratic workers' and community control.

The Tories also plan an increase in hydrogen-fuelled energy, but its effect in reducing emissions is, at best, unclear as we do not know whether fossil fuels or renewables will be used in hydrogen production.

The plan includes the building of a number of Carbon Capture and Storage (CCS) plants in areas of the north of England. These could potentially create much-needed jobs, and unions will need to exercise their power to ensure any benefits will be felt by working-class communities. CCS has a place in the transition, but its benefits are limited as it assumes a continued reliance on the burning of fossil fuels, and there are serious questions about its effectiveness on a long term industrial scale.

The ten-point plan includes funding for the installation of 600,000 heat pumps, a clean electric alternative to gas boilers, in homes and public buildings by 2028. Many of the policies, including the 'aim' of quadrupling offshore wind capacity by 2040 and its commitment to tree planting, have been announced previously, and there is no new money for these.

Moreover, the government has bungled the expansion of offshore wind farms by failing to build the infrastructure needed to connect up these farms to the national grid.

The proposal picked up in the mainstream media is the ban on the sale of new petrol and hybrid cars by 2030, although hybrid cars emit two and a half times more carbon emissions in real life than in laboratory tests and are not banned until 2035. And a mass roll-out of electric cars is in doubt due to an acute shortage of roadside charging points. Currently there are only 5% of the chargers needed by the 2030 deadline.

This half-baked Tory plan is what to expect from a government that acts in the interests of its big business friends. The measures will not meet the reduction in emissions needed to halt the slide towards the dangerous warming of the earth's temperature.

It relies entirely on the funding of private capital projects, and the market seeing profits and making the necessary switch in production, As the Socialist and the Socialist Party's magazine Socialism Today have consistently pointed out, it is the capitalist economic system that places profits above the interests of the working class, who produce the wealth in the UK and globally. It is this system that has brought us to a 'climate emergency'; a system that has shown itself unwilling and incapable of the decisive action needed to reduce carbon emissions.

Trade unions and working-class communities will need to play a critical role in a just transition to a zero-carbon economy. This struggle will need union power and building a political force in workplaces, colleges and communities that is prepared to fight against workers having to pay the price for climate change; that sees this as part of the struggle for socialist change to avert climactic disaster.

Alongside Johnson's 'building back greener' announcement, his government has given the green light to France's state-owned EDF and China's GNPG to build a new nuclear power station at Sizewell in Norfolk.

However, EDF's nuclear reactor design doesn't work! Another EDF nuclear plant using the same type of pressurised water reactor in Flamanville, France, has been plagued with serious faults, is years behind its start-up deadline, and way over budget. The French energy minister this year described the project as "a mess".

Currently, EDF is building the Hinkley C nuclear power plant in Somerset using the same PWR design. Commissioned in 2008 at an estimated cost of £4 billion, Hinkley C was meant to be generating power for the national electricity grid this year, but is unlikely to start doing so until 2025 or 2027 at the earliest. Its current cost is over £22.5 billion.

Sizewell C, estimated at costing £20 billion, has already exceeded its original budget, making the cost of electricity, should it ever come on stream, more than double that produced by renewables such as wind and solar power.

With a few hundred permanent jobs required to run the plant, if and when it's completed, Sizewell C will be one of the most expensive job creation programmes ever.