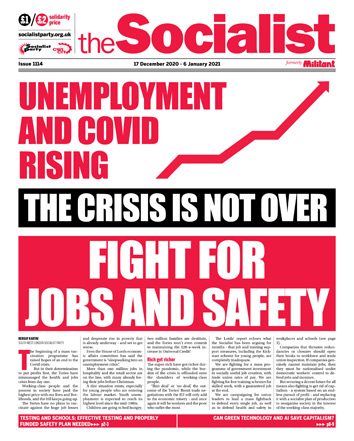 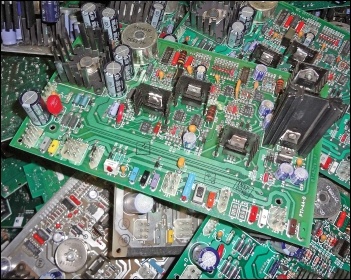 The following article is an edited transcript of the speech by Mark Best in a workshop at the Socialism 2020 event organised online by the Socialist Party from 20-23 November (see 'Socialism 2020: Growing search for ideas to change the world' at socialistparty.org.uk).

We would encourage everyone who spoke in the excellent discussion at the workshop to write up their contributions as future articles for the Socialist - [email protected] We also welcome other contributions to the debate.

When Karl Marx and Friedrich Engels were writing in the 19th century, the capitalist system, despite the poverty and inequality associated with the exploitation and oppression of workers nationally and around the globe, and the economic booms and slumps which are rooted in the profit system itself, was nonetheless able to develop and harness science and technology, and produce goods and services which could take society as a whole forward.

But capitalism today is very different. It is decaying. It is crisis-ridden, and is no longer able to make full use of the scientific and technological gains which are still being made today. To make use of those advances, to invest with confidence, the capitalists would need stable expanding markets in which to sell their goods and services at a profit on a long-term scale which, because of the contradictions inherent in a system based on profit rather than need, is no longer the case.

The Covid pandemic has highlighted the scientific and technological gains that can be made. Some of the vaccines which have been announced use something called messenger RNA, which is a breakthrough in vaccine technology. But that has been made possible on the basis of governments across the world pouring public money into research. After the SARS epidemic, the pharmaceutical companies had ditched their research into a coronavirus vaccine because it was not deemed profitable to continue with it at that time.

One of the fields which makes clear the crises and chaos of capitalism is green technology. The idea that the capitalist class will be able to funnel investment into wind, solar and tidal energy, to be able to produce cheap energy, in the future on the scale necessary in order to grow after this crisis, is clearly unlikely. Capitalism has the contradiction of being a global system, but at the same time based on nation states. This means that you can't have a directed plan of production to solve the many problems facing society today. The actions of just one capitalist class are not enough to solve global warming, the plastics crisis, biodiversity crisis, etc.

That doesn't mean, however, that, under the pressure of workers and young people across the world, some limited actions won't be taken to attempt to solve the environmental crisis. In the short term, potentially some smaller countries could try to seize an opportunity to corner what they potentially think will be an expanding market. But even if one capitalist country decided to ban the burning of fossil fuels and plant thousands and thousands of trees every day, the government next door might say, right, we want as many polluting industries as possible. The question of climate change and environmental destruction is a global one.

There are many examples of how new technologies come up against the limits of the capitalist system itself. The rise of the gig economy over the last ten years has led the Economist magazine to imagine a future in which you won't have a job, you will just have skills and sell yourself, and by being so flexible you'll be able to live a life of luxury.

But the reality of what the gig economy actually means hit home years ago. It's obvious that these apps are being used to drive down working conditions and pay. And resistance to that exploitation has been a feature of workers' struggle across the world.

Under socialism, however, the technological discoveries, which have led to the use of smartphones and the ride-sharing apps and algorithms which match a person to a job, would have massive potential. You can imagine a system in which those of us who like to go cycling, for example, could do that but at the same time help those who can't get out of the house to obtain food.

In reality, many of the applications of this technology aren't actually profitable at the current time. They exist on the basis of massive investment from hedge funds, particularly in Silicon Valley, on the expectation of future profits. And they are being used to try to atomise workers and break the power of the organised working class.

It is also interesting that some of the main investors in the technology for self-driving cars have been Uber, Amazon and Google. Self-driving cars used in a socialist planned economy would be a marvellous way of reducing the amount of cars and pollution within our cities as part of an expanded public transport system. You could have a fleet of 'cars' which carry six or seven people and then automatically work out where the car needs to drive to efficiently deliver people to where they need to go.

Jobs like bus and taxi drivers would no longer be necessary, but with a socialist planned economy their skills could be redeployed, rather than being thrown onto the scrapheap as happens under capitalism.

Another issue is that many of the self-driving car companies are putting money into creating very detailed maps of the roads across the world. But there are multiple companies doing this, and it's creating vast amounts of data, which then needs to be stored on servers which use massive amounts of energy. And all of these companies, because of competition under capitalism, are keeping their work under lock and key.

Whichever one works best will be kept. But the others will probably just be thrown in the bin, along with all the data collected because, with an absence of co-operation, each system is incompatible with each other. This massive amount of wastage is inherent within the capitalist system.

One of the trends at the moment which really sums up the nature of technology under capitalism is that of a computer connected to the internet being placed on as many devices as possible - the so-called 'internet of things'. One example is fridges connected to the internet, making it possible for companies to collect and sell data on how much is being consumed, how often you shop, what you're buying, and so on.

Companies use this to advertise and sell more goods. But it's not creating new productive wealth. It's just allowing companies to sell their goods better and get one over on their competitors. But under a socialist system, that kind of data would be invaluable for drawing up a democratic plan of production nationally and internationally.

Technology is also changing the workplace. Artificial intelligence and machine learning are being used even more, and the pandemic has sped this up. Jobs in sectors like law, journalism, architecture, aspects of medicine, and so on, are being replaced by algorithms. A deskilling of these previously relatively well-paid jobs has pushed law clerks, local journalists and others towards the working class and its methods of struggle, through unions and strike action.

This is particularly true in fields like journalism. Recently, the Guardian even published an essay which it claims was written by an algorithm. But what they actually did was tell the machine to write six essays and then picked the best paragraphs from each one to make a coherent argument. So, despite claims that artificial intelligence has developed so far that you no longer need human input, that's not the case.

Often the things that get advertised on Facebook, like spam and clickbait articles, are written by a computer. You can tell because they're so repetitive and aren't adding anything of note, regurgitating other articles or press releases. So computers can do those tasks, which are relatively simple. But it's impossible to produce creative ones in this way.

Automation in manufacturing and in some service sectors threatens to throw many workers onto the scrapheap. There are already some factories in which goods go in one end and finished items come out the other using only automation. But these are extremely limited, and mainly run in-between workers' shifts. And even then, you still need workers to maintain the machines and the infrastructure network necessary to run those factories - the internet, the power lines and that sort of thing.

Automation in that way hasn't abolished the need for workers who are connected to the productive forces, and has placed in the hands of relatively few workers the production of masses of goods.

But there's also the fact that capitalism is a blind system. The companies don't set out and say, 'I want to create the most automated factory that I can'. They just want to make the most profit possible. And if this means paying workers the minimum wage or less, then this is what they will do. For example, workers are paid pitiful wages to wash cars, when automated car washes have existed for decades.

So while there is one trend within capitalism towards automation, capitalism cannot take any trend to its full conclusion. But under a socialist system, in which we can plan and make full use of those technologies to automate everything possible, it would be possible to free ourselves up from drudgery.

Even under capitalism there is potential to use new technology for our benefit. Smartphones are used by companies to divide and try to atomise the working class. But in the massive factories in the neo-colonial world which produce these, they are helping to draw together and create potentially powerful working classes.

No ruling class has ever left the stage of history without a fight, and there's no way that the capitalist class would create the technologies, and utilise them to the full and create socialism by accident or through the backdoor!

The technology and the productive capacity is there for socialism already, but the levers of political and economic power lie in the wrong hands. There are many ways in which the technology we have now could save us work and free our lives from drudgery. We could run society based on what is good for the majority of people, as opposed to what makes a profit for a few of those at the top.

The key question for us is - how do we get to that society? And that is a question of the working class taking control of the factories, the wealth and knowledge which is locked up in the vaults of various companies, and using it to democratically run society in the interests of the majority.