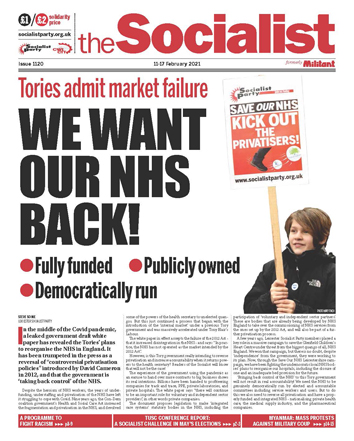 Over 550 attended the online conference of the Trade Unionist and Socialist Coalition (TUSC) on 7 February in preparation for the local elections in May. Dave Nellist, TUSC national spokesperson, was in the chair. He explained that the conference was meeting "at a pivotal political moment, against the background of a decade of austerity." And that "if there is nobody in May challenging why austerity should continue, it's just going to be a debate between establishment parties on how austerity should be imposed."

Dave introduced contributions from representatives of the component parts of the TUSC steering committee: the transport union RMT, the Socialist Party, Resist, and a representative of individual socialists involved in TUSC.

Jared Wood, a member of the RMT's national executive committee, spoke first, and explained how it was the railway workers' union that, in 1899, moved a motion calling for the Trades Union Congress to establish a committee, to ensure a more effective representation of working people in parliament. The following year, in a period of bitter industrial struggle, the Labour Representation Committee held its first meeting. This was the body that went on to develop into the Labour Party.

Jared posed the question: "What force in parliament today is going to prevent the ruling elite imposing the cost of the Covid crisis onto the working class? Who on the left could possibly argue against a project to try and build that force, as the trade unions and socialists did in 1900?"

"There is a massive latent support for a mass party of the working class. We have to build our forces in the trade unions. Building support for independent working-class political representation must be one of the priorities of every socialist in every trade union."

Hannah Sell, general secretary of the Socialist Party, said: "Millions of working-class people are never going to forget or forgive what Johnson has made them suffer in the last year. It is incredible that in this situation Starmer's Labour are not ahead in the opinion polls. Why? Because they have not offered any opposition.

"This was summed up by the farce at the start of this year, when trade unionists in education rightly said that it was unsafe for them to go to work in schools. Under pressure, Johnson was forced into a U-turn to shut the normal functioning of schools. Starmer was desperate to have nothing to do with working-class action or the trade unions, and was still refusing to call for the schools to be shut.

"Starmer's every act is designed to show that, like Blair, he is a Labour leader who represents the millionaires not the millions. This includes the systematic annihilation of Corbynism, with the removal of the Labour whip from Corbyn on completely spurious grounds, and the suspension and expulsion of many Labour Party members who have dared to support him.

"This May, we are going to see a significant number of local authority elections in England, plus parliamentary elections in Scotland and Wales, in a situation where eight out of ten councils that provide social care are facing bankruptcy. Criminally, up until now Labour councils have accepted that they have got no choice but to implement the cuts demanded by the Tory government. We know that is not going to change under Starmer's rule.

Councils could force a U-turn

"This is at a time where the government has spent unprecedented amounts of money. Last year they spent three-and-a-half times the annual spending proposed in the 2019 Labour manifesto. They are not spending money in the interests of the working class, but to prop up their rotten system.

"It has never been clearer, that if Labour councils were to stand up and fight and refuse to implement Tory cuts, to demand more money from central government, they could force this endlessly U-turning bunch of Tories to retreat.

"The Covid crisis and its aftermath mean working-class people are facing some of the hardest battles we have faced in the last century. If we fight without an electoral arm to our struggle, we are fighting with one arm tied behind our back. For all those reasons TUSC is essential."

The conference also heard from Dave Roberts of 'Resist - movement for a people's party'. This is the group founded by ex-Labour MP Chris Williamson who was driven from the Labour Party as a result of his support for Corbyn. A number of ex-Labour Party candidates and activists are approaching TUSC as they see the need to oppose austerity in May. Pete McLaren, representing those socialists that support TUSC and are not members of a constituent part of the coalition, said: "TUSC is a stepping stone in the process of building a mass working-class political party, and has made tremendous strides in the last 10 years."

The conference discussed TUSC's core policy platform for the local elections in May (see tusc.org.uk). Clive Heemskerk, national election agent, spoke to introduce the document: "These are eight bullet points, they are not an exhaustive list, or a national manifesto. Instead, it is the minimum commitments anyone who wants to stand under the TUSC banner has to make in order to become a TUSC candidate in this May's elections.

"TUSC is a coalition of organisations and individuals, and the core policies platform is the bottom line of what unites TUSC candidates. To put it simply, if somebody is not prepared to commit to go into the town hall and vote for the council to refuse to implement austerity politics, they cannot be a TUSC candidate."

Contributions were made from numerous other trade unionists, socialists and community activists. Nancy Taaffe from London outlined how "in Sadiq Khan we have a mini-Kier Starmer" planning further attacks on workers. Onay Kasab listed the many strikes of workers in London against Labour authorities, including those facing 'fire and rehire' in Tower Hamlets, and school transport workers in Hackney. He made the case for these workers to be TUSC candidates in London.

Jim McFarlane, a member of the Unison public sector union national executive committee from Scotland, speaking in a personal capacity, explained how the question of Scottish independence will play a prominent role in May's Scottish parliament elections. Jim highlighted the need for TUSC to stand to expose both Labour and SNP as agents of Tory austerity.

Public transport workers have been among the worst affected by Covid-19 infections in the workplace. Declan Clune, secretary of Southampton and District RMT Bus and Coach branch, outlined the struggle for PPE as well as the planned cuts of public transport budgets by Labour councils. He put forward the need to renationalise bus services along with the other public transport networks, to be run in the interests of the community rather than profit.

Part of TUSC's core platform for the elections is the need for united working-class struggle against racism. "We need candidates who can unify workers and who support good jobs and decent pay, we need a political opposition that can offer workers the economic and political changes we need to get out of this crisis", explained Deji Olayinka, a Black Lives Matter activist and Socialist Party member.

Christine Williams, a pensions campaigner, spoke of the need to fight for pension justice after the betrayal of successive Labour and Tory governments undermining workers' pensions agreements. Socialist Students and Bangor rent strike organiser Michelle Francis made the appeal: "We need like-minded, young socialists running in, and winning, these local elections under TUSC, to be the leading voices against cuts, austerity, discrimination and capitalism."

The conference concluded with the speakers from the platform getting the chance to respond to the discussion. Hannah Sell in her reply made the point: "TUSC is absolutely not about passively supporting professional politicians. It is providing a means by which workers on strike against 'fire and rehire', people who are trying to stop their community centre being cut, people fighting evictions, can stand at the ballot box."

She added: "Today is a good start, but go away from this conference and think, can you stand in the elections? But also, who do you know from your trade union branch, from your community campaign, from your Black Lives Matter organisation, that you can also encourage so that we can have the biggest possible electoral challenge to austerity at the ballot box this May."