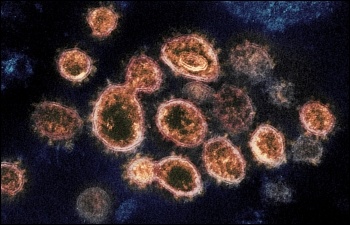 Never had it so good

But for some, it wasn't all bad news. The world's top 15 hedge fund managers scooped £16.9 billion in total - the equivalent of the total economic output of Zambia with its population of 18million.

One group of important workers during lockdown have been parcel couriers. But unlike hedge fund managers, they haven't fared as well. Some self-employed drivers contracted to Amazon claim that after deductions, including van hire charges and fuel costs, they can end up earning as little as £1.83 an hour - far less than the minimum wage of £8.91 an hour from 1 April.

Meanwhile, anti-union Amazon, whose global sales soared past $100 billion in the last three months, enjoyed a 35% increase in UK profits in 2020.

According to homelessness charity Shelter, nearly 445,000 private renters in England have fallen into arrears or been served with some kind of eviction notice in the last month.

Housing minister Robert Jenrick is keen to highlight the government's 'compassion' by extending the ban on bailiff-enforced evictions to the end of March. However, this is just kicking the can down the road as it doesn't address the huge increase in Covid-related household debt. Moreover, 'no reason' landlord evictions are still being granted by the courts.

Shockingly, 60% of Covid-deaths last year were disabled people, according to the Office for National Statistics.

But this awful fact is not solely attributable to disabled people's physical vulnerabilities. Social class was also an underlying cause, eg poor housing, low income, and so forth.

Campaign groups point to the lack of infrastructure to allow those shielding to access food and medicine during the first lockdown, as well as cuts in social care support.

Many bereaved families continue to be denied access to Bereavement Support Payment despite Prime Minister Boris Johnson recently admitting in parliament that it is an injustice. The contributory benefit allows for a £3,500 lump sum payment and then up to £350 a month for the first 18 months following the death of a partner.

But the Department for Work and Pensions will only make payments to married couples or those in a civil partnership despite a Supreme Court ruling in 2018 that this was discriminatory and therefore unlawful.