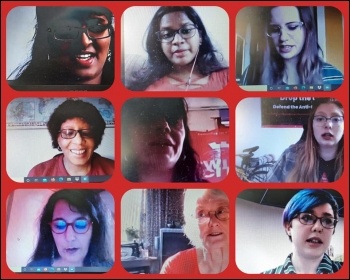 In recent years, International Women's Day has been pushed as an opportunity for companies to encourage women to spend money, or for employers to try to show that they support equal opportunities for their women workers. The rally on Sunday 7 March was a real inspiration that reminded us of its true socialist origins. Common themes were the huge impact of the pandemic on the lives of women, and the desperate need for mass workers' parties to defend the conditions of all workers.

Rashme, a member of the Chennai Committee of New Socialist Alternative in India, described the lack of preparation made by the Indian government at the start of the pandemic, with lots of migrant workers having to travel back to their home areas with no transport provided. Many women lost their lives during this time. She spoke of how, despite poverty and the double burden of work and looking after families, workers in the garment industry fought to defend their salaries.

Women workers in Ireland previously employed by Debenhams have also been on the picket line, fighting for their rightful redundancy packages despite being harassed by security guards and the police. Carah Daniel, a central committee member of Militant Left in Ireland, talked about how during the pandemic it is workers who keep society going, not the bosses. She also highlighted the 14% gender pay gap in Ireland, something replicated internationally.

Sheri Hamilton, from the Marxist Workers' Party South Africa, described a pandemic of femicide where a women is killed every three hours, only one in 36 rapes is reported, and there is a conviction rate of less than 8%. Women are organising in the trade unions against gender-based violence, to tackle sexual exploitation in the workplace, and the scandal of sex for jobs.

Unsafe abortions are one of the main causes of early death among women globally. Pamela Meza Lobos from Socialismo Revolucionario, Chile, spoke of how they are campaigning for women's reproductive rights. Inspired by the victorious struggle for abortion rights in Argentina, women are fighting for similar rights in all countries in Latin America.

Claire Bayler, from the Independent Socialist Group in the US, said that young people will not be willing to sacrifice their future for the crisis of capitalism. Many have incurred huge amounts of debt to fund degrees that no longer guarantee a good job, with young women suffering a gender pay gap throughout their working lives.

Leila Messaoudi, general secretary of Gauche Révolutionnaire in France, and a local government councillor, spoke of the need for a new mass party to defend the rights and gains of workers, as the existing parties have failed to do this.

Clare Doyle, CWI International Secretariat, praised the fighting socialist women who had taken part in the rally. She detailed the role of women in some of the momentous revolutionary events in history, such as the Petrograd textile workers who took strike action in February 1917 as part of the revolutionary movement to overthrow the Tsar in Russia.

Around the world, governments will expect workers to pay for the health and economic crisis. Helen Pattison, Socialist Party London regional secretary, explained how the ruling class is banking on divisions among the working class, forcing us to fight over crumbs rather than for the huge resources that they own and control. She pointed out: "It will be mass united class struggle against sexism, inequality, and all forms of oppression for a socialist world that will be key."

The Socialist Party has produced 'a fighting programme for women's rights and socialism', which is currently being printed and will be used in all our campaigning, including in the trade unions and for the local elections.

Socialist Women: At the frontline of the resistance