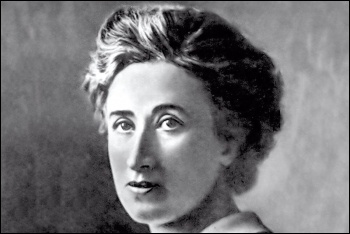 Rosa Luxemburg was born in Poland on 5 March 1871 - the year of the Paris Commune. In her short lifetime she experienced three major revolutions and participated in the most important debates among socialists internationally.

Before the Bolshevik-led October 1917 revolution in Russia, socialists had no model of a successful socialist revolution. They were trying to grapple with how workers would move into struggle and become conscious of the need to change society. Rosa was a thinking and 'creative' Marxist, ready to defend the ideas of Marx and Engels but prepared to develop them when necessary.

Hers was an inspirational life, exuding passion and determination. She was passionate in her love of life, about her beliefs and principles and her desire to see an end to all exploitation and oppression. She showed courage and determination, standing firm when in a minority or facing repression, imprisonment, illness, even death.

Rosa became involved in revolutionary politics when she was still at school in Poland. At the age of 18, state repression forced her into exile in Zurich.

When Rosa moved to Germany in 1898 she had already established herself among international socialists as a Marxist speaker and thinker. She became active in the German Social Democratic Party (SPD), the largest working-class party in the world. By 1912 it had amassed one million members, 15,000 full-time party workers, 90 daily newspapers, youth and women's sections and 2.5 million affiliated trade unionists.

The party described itself as Marxist and revolutionary but had never been tested in struggle. The end of the 19th century saw an economic upswing allowing the German ruling class to buy a degree of industrial peace through some economic and social improvements. But the repressive regime restricted political activity.

Despite her youth and the internationally recognised political authority of the German SPD leaders, Rosa would speak out if she disagreed with their political orientation. Sometimes she confronted overt sexism from an overwhelmingly male leadership unaccustomed to confident female revolutionary leaders.

Her first real test came when Eduard Bernstein, an SPD leader, challenged the basic ideas of Marxism. Capitalism, he argued, had overcome its basic contradictions. Economic crises had been eliminated through credit, the development of monopolies and 'globalisation'. The SPD should no longer stand for class struggle and revolutionary change but economic, social and political reform within the existing system.

In her famous pamphlet 'Social reform or revolution' (1899), Rosa Luxemburg argued that capitalism may have experienced a prolonged economic upswing but it hadn't solved its contradictions. Credit could only temporarily delay a crisis and would also intensify it. Monopoly capitalism had not eradicated competition, which was sharpening between the imperialist countries, resulting in further conflict when war broke out in 1914.

Bernstein's theory of gradual reform of capitalism was utopian, she argued. As capitalism moved into crisis the capitalist class would attack the wages and conditions of workers. The fight for revolutionary change in society was as relevant as ever.

How do working people become conscious that society needs to be transformed and that they have the power to change it? For Rosa, reform and revolution were inextricably linked.

By struggling for economic, social and democratic reforms on a daily basis, workers become more confident, better organised and aware of the need to fight for a fundamental transformation in the way society is structured.

Bernstein's arguments were defeated at three SPD congresses. But over the next few years the gap between revolutionary theory and practice widened. Day-to-day activities, especially standing in parliamentary elections, became increasingly divorced from the struggle for revolutionary change. Sections of the leadership were conservative and bureaucratised, holding back the movement of the working class.

Rosa, more than anyone else, recognised the dangers. She waged a constant struggle against reformism within the SPD. When revolution broke out in Russia in 1905 she grasped the opportunity to try and shake the leadership out of its conservative complacency.

A new historical period was opening up. In 'The Mass Strike' she describes how Russian workers were striking in their thousands; how their strikes became generalised and political, giving confidence to less organised workers to strike for their own economic demands.

She lambasted the SPD leaders who argued that mass strikes were purely Russian 'exceptionalism' and not relevant to Germany. The growing crisis of capitalism, she argued, would push the German working class into following their Russian brothers and sisters.

Rosa emphasised the spontaneous nature of the strike movement. Some critics have used this to argue that she ignored the role that a revolutionary socialist party plays, believing that spontaneous mass movements alone would be sufficient to change society. This is a crude misrepresentation of her thinking.

Rosa aimed to shake up the ossified German leadership, who either thought that mass strikes were irrelevant or could be organised at will by the party, regardless of economic social and political conditions.

Rosa bent the stick towards spontaneity but also recognised the necessity of a revolutionary party, which could unite together the most conscious workers to give a lead in a revolutionary situation. In her words, the party must not "fold its arms" and wait for a spontaneous movement of the people to "fall from heaven" but instead "hurry on ahead of the development of things and seek to accelerate it."

But in the concrete situation in Germany, Rosa didn't draw the necessary organisational conclusions. She was confident that when German workers moved into struggle they would either push the SPD leaders into taking a more revolutionary position, or replace them in the course of struggle.

Lenin was critical of this approach, as he was of Rosa's position on the national question. In Russia, he pursued a very different course, patiently pulling together a core of revolutionary Marxists around a clearly defined political programme. Politically and organisationally cohesive, the Bolsheviks successfully gave leadership to the revolutionary movement in 1917 Russia.

Rosa's failure to organise a coherent political and organisational opposition to the SPD leadership proved fatal both to the outcome of the German revolution and to her own life. Individual political and personal courage were, on their own, insufficient for the historical tasks at hand.

The bankruptcy of the SPD leadership was laid bare in 1914 when it backed the war aims of the German capitalist class. Only a handful of revolutionaries around Rosa Luxemburg initially opposed the imperialist war. Rosa herself spent much of the war in prison.

In 1916, an attempt was made to strengthen organised revolutionary opposition to the war through the formation of the Spartacus League. Though it attracted some of the best youth and workers in Germany, it remained a loose 'network' rather than a cohesive political party.

When the German revolution finally erupted in November 1918, the Spartacus League and its successor the German Communist Party (KPD) (formed in the heat of the revolution) were too weak to lead the working class to successfully overthrow capitalism as the Bolsheviks had in Russia in October 1917.

The state forces, with SPD leaders at their head, reasserted control and crushed the revolution, brutally murdering Rosa Luxemburg, Karl Liebnecht and many other heroic revolutionary workers.

As the revolution faced imminent defeat and she faced possible death, Rosa confidently wrote: "The revolution will come back and announce I was, am, I shall be". Within five years of her death, she was proved right as revolution broke out in Germany 1923.

As socialists today, we maintain Rosa's confidence that working-class people will struggle to change society. But we combine that confidence with a determination to learn from her mistakes and build a party which can ensure that next time the struggle will be successful.