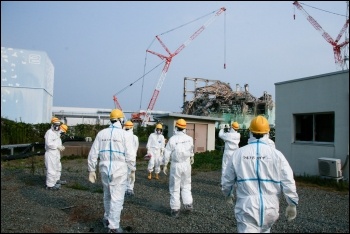 Nearly 20,000 people died in the most costly natural disaster in Japan's history. On 12 March, the media reported an explosion at the Fukushima No 1 Nuclear Power Generation Plant. The drama unfolding in the plant had important consequences both for Japan and environmental movements throughout the world.

When the earthquake hit the three operational reactors, the plant went into emergency shutdown. 50 minutes later the tsunami slammed into the plant, damaging both the emergency generators and the cooling system, necessary because the reactors continue to produce heat after shutdown.

There followed a cascade of system failures, resulting in hydrogen explosions, the meltdown and melt-through of the three reactor cores, in the most serious nuclear accident since Chernobyl in 1986.

Workers in the plant were worried. Plant manager Yoshida Masao described the situation they faced: "I thought we were really going to die. With no water coming in, the No 2 reactor was going to melt. All fuel was going to really override pressure in the containment vessel and escape outside. That would have been a worst-case accident, with corresponding amounts of radioactive substances all spewed outside. That would no longer be on a Chernobyl class - maybe not a 'China Syndrome', but something like that."

Despite warnings about the possibility of a tsunami higher than the protective wall, the accident manual of the Tokyo Electric Power Company (TEPCO) that ran the plant had no guidelines for dealing with such a situation. Workers in the plant were left alone to develop their own solutions.

They faced high radioactivity and at least three hydrogen explosions. For the most dangerous tasks, a group of older workers and section leaders, referred to within the company as the 'suicide squad', was created. Workers used fire-engines and boric acid pumps to inject seawater into the generators. However, they faced opposition from both the company and the Prime Minister's office.

Seawater corrodes components in the generators, making decommissioning of the plant, with huge losses and bankruptcy for TEPCO, unavoidable. At one point, Yoshida defied orders from both the company and the Prime Minister's office to stop using seawater.

In order to inject the water, pressure had to be reduced first. However, in the No 3 reactor this proved difficult. 'Dry well venting,' releasing radioactive gases into the atmosphere directly, without first passing them through water, was seriously considered. Had this been done, TEPCO's own estimates were that within three hours, the radiation level would reach 250 millisieverts (the maximum permitted annual exposure), at a distance of 20 kilometres from the plant.

Officers of the Nuclear Industry Safety Association tried to impose a press blackout. With no time to evacuate residents they sought to hide their plans. However, another explosion in the reactor building meant pressure fell, and they could get water into the reactor.

On 17 March the US embassy advised its citizens living within 80 kilometres of the plant to evacuate. On 25 March Kondo Shunsuke, chair of the Atomic Energy Commission, worked out a worst-case scenario should the reactors spiral out of control. He proposed a 170-kilometre radius for compulsory evacuation, with a 250-kilometre radius "optional". This would have meant evacuating Tokyo.

US experts' fears were not groundless. They believed a large number of spent fuel rods, stored in a pool by the No 4 reactor with no containment, were overheating.

We now know that was not the case. Water had flowed from the reactor well into the pool. Had planned work on the reactor not been delayed for a week, the water in the pool would have evaporated. The US theoretical physicist Michio Kaku was correct when he stated in June 2011 that they "came close to losing northern Japan."

In the end though the worst case was avoided and radiation contained. While debates still rage about the effect of low-level radiation on cancer rates, deaths due directly to exposure to radiation have been very few with only one death legally recognised.

But the disaster has not been without cost. 160,000 people were evacuated from an area within 20 kilometres of the plant. It is estimated that 2,200 died as a result of the accident, mostly from the evacuation.

Surveys of the evacuees show that large numbers do not intend to return. Many have suffered drastic reductions in income, worsening health and high levels of stress. Their life expectancy dropped from 65 to 58 years.

The clean-up has proceeded extremely slowly. There are enormous problems disposing of the contaminated water used for cooling. The reactors may never be properly decommissioned.

The economic cost of the disaster has been huge - $180 billion and still rising. The ecological effects are still not fully known. Even this month, fishing co-ops stopped sales of rockfish, due to dangerously high levels of radioactivity present.

Protest demonstrations following the disaster were huge. Some opinion polls showed 80-90% in favour of scrapping nuclear power. While both the Democratic Party government, and the Abe-led Liberal Democratic Party government that replaced it, pushed restarts, ten years later only nine of the 39 reactors at five plants in the country have restarted. In addition to the opposition, new safety regulations make it uneconomical for companies to restart some reactors.

Kokusai Rentai (CWI in Japan) opposed all restarts and called for the nationalisation under democratic workers' control and management of the nine regional electricity companies. In 2012 the government partly nationalised TEPCO to bail out the company, making its debts public.

We also raised the demand for fighting trade unions independent of management. Denryoku Soren, the enterprise union organising power workers, was better known for campaigns promoting nuclear power and backing pro-nuclear candidates than raising problems with safety exposed by the accident. It supported TEPCO's 20% cut in workers' pay, justifying this by referring to the plight of evacuees - although they had refused to meet with residents groups opposed to nuclear power.

Shutdown of the reactors meant Japan losing 30% of its power supply. Despite this, with voluntary campaigns to conserve energy there were no power-cuts, demonstrating the massive waste of energy under capitalism.

Kokusai Rentai called for a massive programme of investment in renewable energy and energy conservation. Instead, pro-business governments have used formerly mothballed coal and gas generators and abandoned targets on carbon emissions.

Their pro-nuclear stance is more about recouping profits from the enormous amounts of fixed capital invested in the nuclear programme than concern about greenhouse gas emissions.

The Fukushima accident shows that attempts to portray nuclear power as a safe form of energy and a solution to global warming are misguided.

Had there existed a genuine mass workers' party, Fukushima could have provided the spark for a break with capitalism and for a socialist Japan. In the absence of such a party, despite the massive demonstrations, it was one factor paving the way for eight years of a right-populist Abe government.