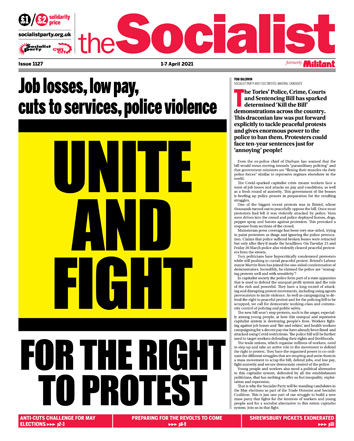 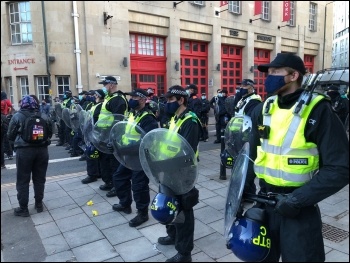 Crashing riot shields and truncheons on top of protestors who were sat down, chanting 'peaceful protest', showed the powers the police already have. Unlike the overnight tent camp three days before, where 200 people were attacked, this time (Friday 26 March) the thuggery has been recorded by many filmmakers. They, along with journalists, were also viciously attacked, pushed to the ground and their equipment smashed.

Our 1,000 leaflets were soon gone. So too, the placards with Trade Unionist and Socialist Coalition election posters on one side and the Socialist Party's 'Defend the Right to Protest' on the other. Most other placards were handmade. Trade union banners and flags have mostly yet to appear.

About 150 people gathered in Plymouth on Sunday 21 March for a socially distanced 'Kill the Bill' protest, which was entirely peaceful. The police did not interfere, even though the protest was right outside the police station.

I managed to interview quite a few people. One quote that really stood out to me was: "I'm fed up of not being heard." This Tory government is trying to silence those of us that have the bravery to speak up.

The 'Kill the Bill' protest in York on 25 March marked the first of what will be numerous regular protests occurring every Thursday.

It was heart-warming when the crowd broke out into 'Solidarity Forever' by Pete Seeger, a left-wing anthem.

"No justice, no peace, no racist police". "This is what democracy looks like".

Through their joint effort, protesters were able to block the traffic outside the police station and the Peace Gardens, by sitting down peacefully, gaining a sense of empowerment. Fortunately, we saw little to no interference or presence of the police, and in turn the city was shown a peaceful, but firm stance against the Tory party's authoritarian measures.