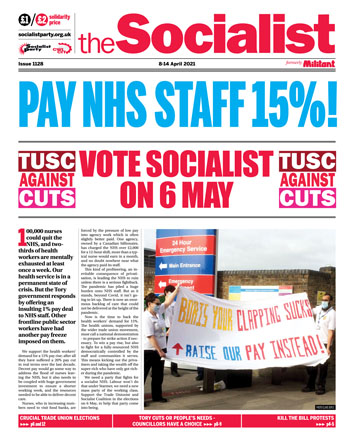 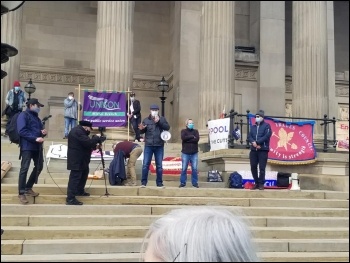 The platform at the Liverpool TUC demo against the Tory commissioners, photo Liverpool SP   (Click to enlarge)

After the arrest of Liverpool's Labour mayor Joe Anderson over allegations of corruption, the Tory communities minister Robert Jenrick ordered an investigation which was chaired by Max Caller.

It found that financial malpractice had resulted in a loss of £100 million to the city and the report concluded that it was as if the city had been run by a "small cabal of its enemies".

He also found evidence of widespread bullying of management when they tried to challenge what they knew to be malpractice. None of this we would disagree with, but the solution to the problem proposed by Caller is that government commissioners take control of those areas of local government which have been affected, ie highways, property management and regeneration.

After this announcement, Liverpool Trades Union Council received two branch motions calling for an emergency executive to discuss a response. We agreed to organise a public meeting via Zoom on 30 March which attracted over 70 participants.

At that meeting, people expressed anger at the idea that a Tory government, responsible for dodgy deals over multibillion pound contracts for their corporate backers who failed to deliver on track-and-trace and PPE, could be trusted to solve the problems in Liverpool.

It was also pointed out that Jenrick had abused his ministerial position to rush through a property deal for Tory donor and pornographer Richard Desmond to avoid paying £45 million in taxes to Tower Hamlets council, which has some of the worst social deprivation in the country. Desmond later made a £12,000 donation to Tory party coffers.

The public meeting agreed to call for a static protest in Liverpool city centre on 3 April so it could be made Covid-safe, and about 150 people attended. We had many speakers take the mic and most were just as critical of the Labour council as they were of the Tory government and their commissioners.

Roger got a good reception when he argued that we must build resistance to Tory plans to reduce the number of councillors from 90 to 30. But, he added, we must get councillors elected who are willing to fight austerity cuts.

Labour in Liverpool is in chaos, with both councillors and MPs saying the commissioners are only here 'to offer advice and guidance'. This is patently untrue, as they have executive powers. But what Labour apologists really mean is that they have no intention of challenging the commissioners' authority. This is nothing new, as Labour has slavishly implemented Tory policy for the past ten years.

Genuine Labour lefts are giving up hope that Labour can ever provide worker representation and are leaving the party in droves. In these conditions TUSC can grow even faster than it did between 2010 when it was created.

A huge political vacuum exists on the left that must be filled. Socialists must ensure that whatever form a new workers' party takes, it is armed with the correct policies and strategy to lead us away from this rotten, corrupt, capitalist system.

'We need more democracy, not less'

Socialist Party members helped build for and participated in the protest called by Liverpool Trades Council (TUC) on 3 April.

Dave Walsh, Socialist Party and TUC chair, told the rally: "This Labour council over the past ten years has collaborated to put this city into managed decline. That's the reality, so we're not going to defend them... [They] have rolled out the red carpet to the Tories, they've said they're [commissioners] coming in to support and advise. Well, we don't see Tories as supporters or advisers to this city we see them as enemies... They will only compound corruption and what they intend to do is to reduce democracy.

"But if we're going to change things in this city we need more democracy not less. The people of this city can change things by electing councillors and electing people who will stand and fight".

Roger Bannister, Trade Unionist and Socialist Coalition candidate for Liverpool mayor, said that the people of Liverpool have an opportunity to use the elections to send a message to the right-wing Labour council - that we are fed up of cuts, privatisations and need a socialist alternative.

Other speakers included members of the UCU, RMT, and Unison unions, and Liverpool 47 councillors who stood up to the Tories in the 1980s.

The watchword of the Militant-led socialist Labour council of the '80s was "Better to break the law than break the poor." Today, councillors could set a legal 'no-cuts' budget and build a mass movement to demand the necessary funding from the Tory government.

Socialist Party member Roger Bannister is the Trade Unionist and Socialist Coalition (TUSC) candidate for the Liverpool mayoral election on 6 May. Roger explains why he is standing.

"The Tories have left working-class people suffering during Covid, while UK billionaires increased their wealth by a third!

Liverpool can't take any more. The Labour council has willingly passed on the government's savage austerity - £420 million cuts, 3,600 jobs lost, and another £15 million cuts and a council tax hike this year!

Instead, Liverpool needs a socialist mayor like me to stand up for local people, and use the position to help build a mass campaign against austerity, greedy landlords, privatisation and closures.

I am a member of the Socialist Party (formerly Militant) which helped lead Liverpool's socialist council in the 1980s. That council led a mass movement against Thatcher's Tory government - successfully winning £60 million back, building 5,000 council houses, five sports centres, and three parks, creating thousands of well-paid council apprenticeships and jobs, with rents frozen for five years... and much more!

I spent over 40 years working in local government, and was active in my trade union Unison, as a branch secretary and member of its national executive council. Day in day out, I helped organise working people to defend and improve their jobs, pay and conditions.

In the 1980s, Militant-supporting Labour MP Terry Fields took only a worker's wage. We were both expelled from Labour for being socialists. If elected, I will take only the salary which I earned as a council employee."