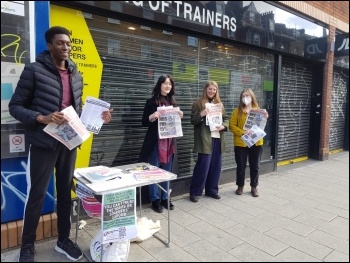 Socialist Party members and supporters have done brilliant work in making sure we smashed through our fighting fund target for the last quarter.

We raised £39,948 out of a target of £25,000. This means that Socialist Party members, part of the Trade Unionist and Socialist Coalition (TUSC), will have the resources we need to have the best possible election campaigns.

Much of the fighting fund has been raised from the tremendous response to our election appeal. Whatever the size of the donation, it has all helped make sure that we have enough posters, leaflets, pamphlets and banners for our election campaigns. Here are just a few of the many donations we have received:

Dave Byrom, Wakefield Socialist Party, donated £50. "A token of solidarity with those comrades standing for TUSC in the May elections."

Another person donating £10 said: "I fully support your movement towards equal pay and the right to protest among many other issues. I believe that only by collectiveness/working together we can bring these changes."

£200 was sent in by local TUSC supporters in Staines towards the Socialist Party's election campaign. Regular readers of the Socialist in Nottingham donated £45.

Mia Hollsing in Caerphilly donated £170, and Dave and Jane Nellist in Coventry donated £100. We also received a £1,000 donation from Wakefield, and £1,000 from Chris Huggins in Essex.

With the partial easing of lockdown, Socialist Party members have been able to hold more campaign stalls, particularly around the election in support of TUSC candidates.

TUSC candidates spoke at the Northampton Kill the Bill demo against the Tories' anti-protest law. There, £10 was donated by the son of an ex-miner.

He praised Militant (forerunner of the Socialist Party) for the activity that was done during the 1984-85 miners' strike. He will be joining the next Socialist Party meeting in Northampton.

Socialist Party members in Ealing, west London, received a £50 donation while campaigning on Kill the Bill, and £23 was raised for the fighting fund in Leicester at a campaign stall to defend the right to protest.

We must make sure that our members don't let up in raising fighting fund during this new quarter. It is important that we plan now how we are going to raise the money, and continue with the brilliant fundraising achieved so far. Please email in plans to the Socialist Party as soon as possible.