The ballot for PCS president and national executive committee opens on 22 April and closes 13 May. PCS is the union for government workers in the civil service and public and private service workers.

The Socialist urges support for the Broad Left Network in this election for a democratic, fighting union leadership. 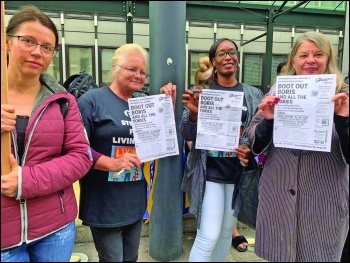 Marion Lloyd has received 42 branch nominations. She is currently BEIS (Department for Business, Energy and Industrial Strategy) group president and on the union's national executive committee. Marion is in the strongest position to challenge the incumbent, Fran Heathcote. Marion spoke to the Socialist and explained why she believes PCS members should vote for her and the other Broad Left Network candidates in these elections.

Why are you standing for president?

We need change at the top of the union. We desperately need a leadership that is serious about tackling the very destructive attacks that PCS members are facing and will continue to face if our employers have their way.

The current leadership is out of touch and doesn't understand, let alone tackle, the day-to-day issues we all face at work.

On the Covid-19 epidemic their whole approach to keeping members safe has been based on individual members making their own minds up about what is safe and acting on their own when it's not. Right at the beginning when we discussed our approach at the national executive committee, it was clear the current leadership was too cautious and was not prepared to organise a serious campaign to keep members as safe as possible.

I and other Broad Left Network members called for a collective response to the Covid-19 threat. Only months later, in the face of the most serious of situations in DVLA, did the current leadership finally act.

This cautious approach became even more apparent when, out of the blue, the general secretary Mark Serwotka, supported by current president Fran Heathcote, informed the employer that they had 'parked' our national pay claim. This was without any discussion with the elected leadership of the union and before we had even met. I can't interpret the as anything but bowing down to this idea that we should all pull together during a crisis - 'national unity' with the Tories.

The national executive committee majority slavishly went along with all this - exactly why PCS members need a leadership prepared to confront the very serious challenges we face.

The government has now announced a further pay freeze with a fair degree of confidence that the current leadership will do little to organise the response required to win on pay. Members feel isolated and left to fight alone. Poverty pay levels within our membership are appalling. 10% of civil servants earn below the living wage.

In our privatised areas many members barely scrape the minimum wage. This is scandalous. We need an almighty campaign for proper pay rates in these areas so that people can make ends meet.

The insistence of our current leadership to have a campaign on pay and only pay is wrong. Surely the most sensible thing to do is to link everything together and include issues such as pensions and a safe working environment. Members are already being forced back into the workplace - Jobcentres, courts, areas of the Home Office, on the back of the Tories 'roadmap' out of the pandemic.

This is on top of those who have been in the workplace throughout the lockdown. But in some areas cases are yet again creeping up and the union must organise collectively to respond to any forced return. We must develop a campaign that everyone can get behind and have confidence in. I would build that, working with reps, and go out to the heart of our membership.

That's why I'm standing - to work with members and reps to build that campaign. One which inspires confidence and gets members involved.

What are the key challenges facing the union and its members?

The Covid-19 threat and the issues we must address will not go away overnight. A safe working environment and the massive mental health and wellbeing issues will be our priority. As will opposition to the pay freeze.

Tackling the huge inequalities faced by members at work is a vital part of building our campaigns to defend jobs, pay and conditions. The Covid-19 pandemic has made clear that the fight for equality is a class issue and a workplace issue for trade unions. Black and Asian people have been hard hit by Covid-19 in large part because of low-paid, exploitative work and poverty housing. Similarly, sexual harassment and LGBTQ+ discrimination are workplace issues - we must campaign for zero tolerance in the workplace. We all have to fight together, so that it's not just left to black people to fight racism, women to fight sexism and so on - it's a collective struggle.

I am determined to root equality properly into our bargaining and campaigning.

Running through all this is the need to build our membership and therefore our strength. Well over 60,000 members have been lost under the current leadership's tenure. We must campaign to organise the most effective response to win. It is this, in my whole experience, that will encourage people to join.

We must give resources to branches and groups to support them in this work - not centralise power and resources as is happening under the current leadership. The National Education Union recruited 50,000 new members because it took a tough, approach to the Covid-19 threat in schools.

Our reps are key to this - and that's why we must give proper resources to our reps on the ground.

What's your position on the forthcoming local elections?

Like many of our members I want to see people elected who stand on a programme to reverse pay decline and job cuts. I have no faith in the Labour Party under Keir Starmer to do that. It leaves a particularly nasty taste in my mouth to see so many Labour councils implementing cuts.

I will vote for any candidate that stands against austerity and opposes all cuts. In my area that means the Trade Unionist and Socialist Coalition, which is standing in many areas across Britain.

I oppose affiliation to the Labour Party. Blair and Brown did us no favours: we remember the Blair and Brown governments that cut 100,000 civil service jobs; privatised jobs and gave our members away to rotten companies which ruthlessly attacked our members' jobs, pay and conditions.

Many of the MPs who supported these policies and moved against Jeremy Corbyn are still around - why would we support them? We are a trade union - not an extension to the Labour Party - and both my opponents in this election would do well to remember that.

Instead, we should influence politicians to benefit us, not just throw money at them and let them off the hook. This is of little benefit to what PCS members need.

What do you say to evidence of government/big business penetration?

The spycops revelations and the case of the Shrewsbury 24 pickets (see 'Shrewsbury Pickets win: Convictions overturned' at socialistparty.org.uk) are in my opinion just the tip of the iceberg. At last it's out in the open! Although this confirms what many of us suspected, it is key that we continue to demand justice including public, uncensored inquiries such as in the case of spycops.

My former union was CPSA (forerunner of PCS). We learnt from the release of the Thatcher government papers how security forces intervened and worked hand in hand with the Tories and the right-wing union leadership. For example, preventing Militant supporter John Macreadie from becoming general secretary after winning the membership ballot.

The government has exposed its agenda by its recent moves to limit the right to protest. Like the anti-trade union laws, they are there to be used against workers, including PCS members. The right to protest, the right to strike, the right to picket were fought for to help us struggle for decent pay, jobs and conditions. All this is to stop us and we must defend our democratic rights.

How will you be different from the current president?

I will actively build a campaign to tackle the issues I have already highlighted. I will ensure that no group of members is left isolated, and develop an approach which inspires confidence and a belief we can do something.

I am a working mother. I know the daily challenges our members face because I too have faced them - including in recent years the threat of losing my job.

I passionately believe in the potential our union has to solve our problems at work. I know what to do and how to do it. I will work with reps and members to build the confidence we need so that members will join together to fight the employer.

"Covid-19 has a disproportionate impact on our disabled members. PCS states that equality is at the heart of everything we do, yet in the move to a predominantly virtual organising world, where the needs of disabled members and activists should have been at the forefront of protecting and promoting our members interests during the pandemic, PCS was found wanting. I am supporting the Broad Left Network in this year's elections. I have seen first-hand the leadership and dedication its activists have shown in landing agreements to ensure that every safeguard that was needed for disabled members, whether they were working remotely or from their offices, was put in place."

"Marion has provided invaluable support by listening and discussing through issues I have faced as a rep and negotiator to find the best means to defend members and make real progress. It is refreshing to have someone prepared to discuss and who considers all avenues, including how to mobilise our members' anger to bring maximum pressure on management in talks to get results."

The Broad Left Network was formed by socialists in response to the need to challenge and replace the current failed union leadership.

The key issues it is standing candidates on include:

PCS Socialist Party members support the Broad Left Network and call upon union activists and members to vote for these BLN supported candidates in the ballot 22 April - 13 May.