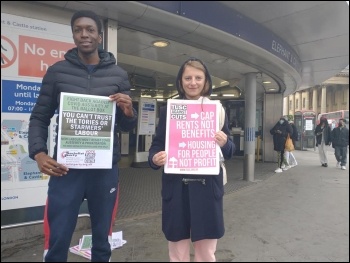 Coventry is the UK's 'City of Culture' this year, yet most of its libraries have suffered cuts, while Sure Start centres and youth clubs have been lost. The famous Transport Museum now has entry fees, as does the Godiva Festival.

The passing on of Tory central government cuts in spending has included all councils where Labour is in power. But council cuts aren't automatic. Each closure, downsizing, restructuring that has torn our vital services apart is approved and carried out by elected councils.

Moreover, the money is there in the country for us to have good quality services. It's more obvious than ever. Billionaires in the UK are now £44 billion richer than a year ago. Ineos's tax-dodging billionaire boss Jim Ratcliffe alone increased his wealth by over £5 billion.

However, we can't get that money without fighting for it. Part of that fight is in the local elections, where the Socialist Party as part of the Trade Unionist and Socialist Coalition (TUSC) is standing on a clear anti-cuts platform, unlike Labour or any major party. Let's get socialists elected and begin to end this carnage.