Forty years ago in May, Bobby Sands, provisional IRA prisoner and an MP, died on hunger strike in the Maze Prison in Northern Ireland. Sands was the first of ten young republican prisoners who died in the next few months in their campaign to get the Thatcher government to concede political status and jail reforms.

In the following article, reprinted from the Socialist in 2006, Niall Mulholland reviews 'Bobby Sands Nothing but an Unfinished Song' by Denis O'Hearn (Pluto Books). 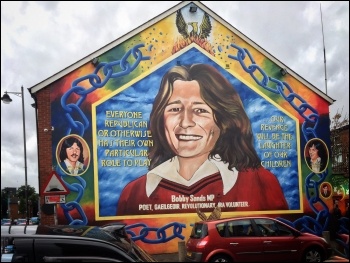 The 1981 hunger strikes provoked enormous sympathy from Catholics towards the prisoners and huge anger towards the vindictive, intransigent Thatcher government. Deep alienation among Catholics prepared the way for the rise of Sinn Féin, which today is the largest nationalist party in the North.

For my generation of Catholic youth, 1981 was an intense, radicalising year. Today, the hunger strikes are still a highly-charged subject and Bobby Sands is an iconic symbol of ultimate resistance to extreme prison repression.

This book is a well-paced, often harrowing read that captures the horrors of prison life and the charismatic Bobby Sands - who, by the time of his death, at 27, was a talented writer, propagandist, poet and songwriter.

Sands was brought up in a mixed Catholic and Protestant council estate near Belfast and played football with Protestant friends. However, the start of the Troubles led to increased sectarian tensions, and the Sands family were forced to flee their home, moving to West Belfast.

As the Troubles worsened, Sands joined the local Provisional IRA, to hit back against state repression. Like many working-class youth, Sands was let down by the leaders of the labour and trade union movement, who failed to take a lead in the civil rights struggle, allowing right-wing nationalists and unionists to dominate 'politics'. O'Hearn says Sands was "enthusiastic but militaristic". After a few minor local IRA actions, Sands was arrested, convicted, in 1972, and sent to Long Kesh prison camp, on the outskirts of Belfast.

Jail transformed Sands into a "radical student". While the Provos' "conservative leaders" of Cage 18 held "burnings of Marxist books and pornographic magazines", Sands and other young prisoners "...were reading and talking about the Communist Manifesto, Trotsky, Animal Farm, Frantz Fanon... everything." Sands studied struggles of the oppressed worldwide. His heroes were Che Guevara and Liam Mellowes, the 1920s left-wing IRA leader.

Sands also learnt to speak and write fluently in the Irish language, which he then taught to other prisoners (partly so they could communicate without the prison warders understanding).

Sands argued that armed struggle was not enough and called for "grassroots" politics in local communities. On his release, in April 1976, he tried to put this into practice. According to a fellow republican, "Bobby's attitude was different from other IRA men. He believed strongly in socialist revolution and political mobilisation".

But whatever Sands' intentions, democratic self-organisation and resistance by a united working class, in a modern, urban society, was incompatible with the IRA's secretive organisation and individual terror methods.

The campaign of bombs and bullets could never defeat the might of the British state - in fact, it provided excuses for the state to increase repressive powers - and only deepened sectarian divisions amongst workers.

It was also counterproductive to developing mass, class struggles. This was brought home by a terrible incident, when an IRA volunteer friend of Sands was shot dead by the army while driving a car in West Belfast. The car went out of control, killing three children. This sparked the 'Peace People' mass movement, which temporarily put the republican movement on the back foot.

After a failed IRA robbery, Sands was once again imprisoned. Under a Labour government, the state cracked down on jails, to try to break the morale of prisoners. The right to wear their own clothes, and other concessions, were withdrawn from those convicted of offences arising out of the Troubles committed after 1 March 1976.

Republican prisoners responded by refusing to wear prison uniforms and were left naked in their cells with only a blanket. The protest escalated under a brutal prison regime. In March 1978, the 'no-wash' protest began. Prisoners lived in intolerable cell conditions - the walls smeared with their own excreta - and were subject to constant humiliating body searches, beatings and torture.

Despite the inhumane prison conditions, Sands developed as a writer and organiser. His optimism and determination spread infectiously to other prisoners.

Although there was considerable sympathy among Catholics for the prisoners' plight, the IRA's campaign stunted an effective support campaign. The Militant tendency (the forerunner of the Socialist Party) took up the issue of the H-Blocks within the labour movement and the working class, in Ireland and Britain.

Militant called for an end to oppression in the prisons, for the right of all prisoners to wear their own clothes and to have a choice of work or study. Militant also called for a labour movement review of the cases of all those convicted of offences arising from the Troubles to determine who was a political prisoner.

This position found a good response among both Catholic and Protestant workers. A resolution moved on the British Labour Party NEC, by the Young Socialist representative and Militant supporter, Tony Saunois, committed Labour to this position.

But the trade union leaders in Northern Ireland did not campaign on the issue of prisons. The result was a sharp rise in sectarian polarisation.

After several years, the Maze protests had not won prisoner rights. The increasingly desperate inmates organised a hunger strike.

In October 1980, seven prisoners refused food. In return for vague promises from the government, they called the hunger strike off in December. Characteristically, Margaret Thatcher refused to move and the prisoners were left angry and demoralised.

But Thatcher vastly underestimated the prisoners' desperation and determination. Sands, now the IRA's OC (officer commanding) in the Maze, led another hunger strike from 1 March 1981, although the republican leadership again opposed it.

His courageous and defiant stand inspired the Catholic community, and the H-Block protests drew mass support across the North. When the independent nationalist MP for Fermanagh/South Tyrone died suddenly, Sands was nominated to fight the seat. His victory, with over 30,000 votes, registered the deep sympathy and support among Catholics.

O'Hearn's book covers the last weeks of Sands' life in harrowing detail. His sense of smell grew as he became feeble; prison warders taunted him with ever-larger portions of food; Sands' body organs failed until his bowels burst, leaving him in terrible agony.

After 66 days of starvation, Sands died on 5 May. Over 100,000 attended his funeral, and Northern Ireland was convulsed by heavy rioting and brutal state repression.

His death had a big international impact: "Motions of sympathy, minutes of silence, and days of mourning were declared in national parliaments of Italy, India, Portugal, Iran and elsewhere..."

Without a prospect of prison reforms, families of the remaining hunger strikers intervened to end the fasts in October. No concessions were given but the Thatcher government had only won a Pyrrhic victory.

The hunger strikes restored the morale of the republican movement. There was no mass influx of youth to the Provisionals but enough recruits for a long campaign. Most importantly, Thatcher's refusal to budge deeply alienated Catholics and prepared for the political rise of Sinn Féin. Later, prison reforms were introduced quietly.

Some commentators criticised O'Hearn's book for its perceived pro-Gerry Adams leadership position. Another author, Richard O'Rawe, the IRA public relations officer in 1981, sparked controversy among republicans with the publication of his book, Blanketmen: An Untold Story of the H-Block Hunger Strike (New Island Books, 2005).

O'Rawe said a deal was offered by the British government, in July 1981, which addressed most of the prisoners' demands for political status. O'Rawe claims the IRA Army Council effectively prevented the prisoners from accepting the deal to ensure republicans kept the sympathy of Catholics and won a Westminster seat.

However, Brendan "Bik" McFarlane, the IRA commander in the Maze during the hunger strikes, completely refutes O'Rawe's claims.

Whatever the truth, this very public row [reflected in the mid 2000s]growing unease and opposition by republicans to the Adams leadership, including those opposed to the leadership's continuing shift to the right.

For socialists, the way forward in Northern Ireland lies in developing a powerful, united working-class movement that opposes sectarianism, injustice and capitalism, and which fights for a socialist solution - the ideal which Bobby Sands and many young working-class republicans believed they fought for.