Vote TUSC and Independent on 10 June 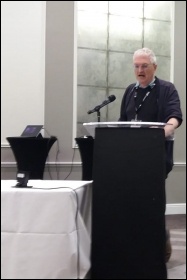 A byelection has been called on 10 June for the Grove Green ward of the London Borough of Waltham Forest.

Socialist Party member Kevin Parslow is the candidate for the Trade Unionist and Socialist Coalition (TUSC).

We are campaigning against council cuts and the selling-off of public land to private developers for unaffordable flats in monster blocks. Around three quarters of Grove Green residents rent accommodation. Half of residents are privately renting.

Multi-occupation is high, so the need for genuinely affordable council housing is an issue here. And TUSC campaigns for the council to bring in rent control.

With two primary schools in the ward, education is important too. We have had parents queueing for leaflets outside them, with one or two asking for more information or wanting to join an online meeting.

A TUSC councillor would oppose all cuts, and propose that the council link up with other Labour-led councils to fight for extra funding from the Tory government, with the backing of residents. A TUSC councillor would put forward a people's budget for Waltham Forest - a budget that meets our needs, that creates jobs on decent pay, and provides the services we need.

This is a rocky government that could be shaken by a mass movement of workers and their families.

The Socialist Party is also supporting independent candidate Claire Weiss in the Lea Bridge ward byelection on the same day. Claire, a local campaigner, is standing against unsustainable development in the ward, including on areas adjacent to the river Lea flood plain.

We've sold the Socialist at the two stations on the edge of the ward. We always find a number of people ready to hear socialist ideas.

What would be the point of electing another Labour councillor to do nothing for working-class people in the ward, and the borough as a whole?

This version of this article was first posted on the Socialist Party website on 28 May 2021 and may vary slightly from the version subsequently printed in The Socialist.