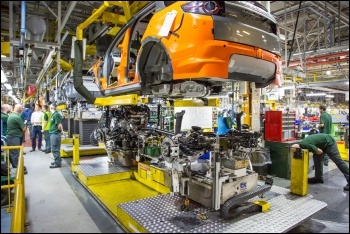 On 28 January, not even a full month into 2021, over 500 GKN Automotive key workers based at the company's Erdington plant received the devastating news that their jobs and livelihoods are to be axed. The redundancy number could be doubled or tripled, with a devastating knock-on effect to others in the associated supply chain.

This is even more horrendous when put in the context of how these 500-plus skilled jobs will be gutted from the working-class community of Erdington, a constituency that has twice the national average of unemployment. And once these jobs are gone, they are gone! Workers will struggle to find new employment with similar wages, forcing workers to struggle to support themselves and their families.

Fast forward to the 19 May, and management turned down the rescue plan put forward by Unite the Union, with convenor Frank Duffy saying: "I'm extremely disappointed in the company's response to our counter-proposal which showed we were a viable and profitable site. We don't accept the company's position and the fight to reverse the company's decision will continue."

It is clear that whatever practical plans and viable alternatives were proposed, the notorious asset strippers Melrose was always planning from day one, back in 2018, to sell off and profit from the closure of the plant.

The Socialist Party extends its solidarity to the GKN workers and encourages Unite the Union to take inspiration from its section in Ireland. There, rank-and-file members took industrial action and occupied the Harland and Wolff dockyard. This swung the position of power over to the workers in the negotiations, not the bosses, making clear the need for government intervention to nationalise the plant to save jobs and livelihoods!

There needs to be the building of dispute committees, community support groups, cross-union solidarity campaigns and protests, both on and offsite, inviting all to attend to build up sustained pressure.