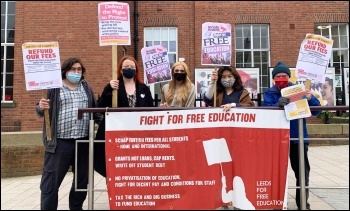 University students and staff across the country have been left outraged at the Office for Students' proposed cuts to university teaching grants as part of the government's 'reprioritisation' strategy for universities.

The proposals include the slashing of the government's teaching grant by 50% for high-cost arts and humanities, in favour of so-called "strategically important subjects", including those in science, technology, engineering and maths. The government has indicated that this would likely be reduced further in future years.

It is clear the cuts will result in further eroding of learning conditions, and could spell the closure of some courses altogether. We've already seen a huge reduction in all of our learning conditions as universities attempt to spend less on staff and resources. This cut will further increase the competition for university resources to the detriment of all. University bosses will likely turn to further casualisation, employing staff on worse terms and conditions, and with less protection to save costs, all of which has a detrimental impact on student learning.

The government has tried to provide cover for its decision by highlighting that it is only a "small proportion of the income of higher education institutions", and that the reforms only affect the "additional funding allocated toward some subjects". While it's true that the teaching grant now only makes up a small proportion of income, and only for some courses, this has not always been the case; there has been a 76% cut overall to the teaching grant budget since 2010.

The Tories are proposing to divert £20 million of funding from art and humanity subjects, and £64 million from London universities, to 'strategically important' subjects.

Socialist Students says that it should be students and staff who decide what funding is necessary for our education and futures - not the Tories or university management who have driven our universities into the ground with cuts, tuition fees and student debt. We stand for the building of united student and staff struggle to win the funding our universities need to provide a high-quality and free education for all students, no matter what they choose to study.

Despite the Tories' desperate attempt to frame this move as in the interests of young people's futures, this attack will not mean more jobs and opportunities for young people - far from it. In fact, it will mean even further restrictions facing working-class young people looking to enter study in the arts and humanities.

Cuts to arts and humanities funding will not deliver better employment prospects for young people. Low pay, casual 'gig economy' and zero-hour working, which are particularly prevalent in the arts, are due to already chronic underfunding of these sectors, and the fact they are run for profit. Under-25s have accounted for two-thirds of all the job losses suffered over the course of the pandemic, a picture which will only get worse as the end of the furlough scheme in October approaches.

Socialist Students says that the student movement cannot allow the rhetoric of 'high-value' courses to go unchallenged and let our universities become divided with competition for resources between subjects. Solidarity between staff losing their jobs, students losing their courses, and communities weakened by the collapse of arts and humanities subjects is essential to build the forces that can fight back against the Tories' capitalist vision of education.

That's why Socialist Students fights for the building of a mass student movement to win free education - for the scrapping of tuition fees, student debt, and for the full reinstatement of teaching grants for all courses along with student bursaries.

On my way to a protest I heard anthropologist, TV presenter and author Alice Roberts describe on the radio how new technology has led to an explosion in archaeological discovery, finds and research. Yet the university management, having already cut the academic staff from 29 to 11, has voted to close the department, disperse two masters programmes to other departments "where they shall surely wither and die", and make the rest of the staff redundant.