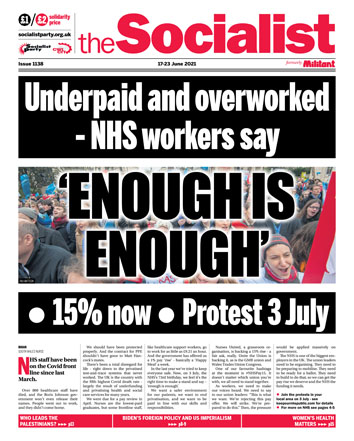 G7 leaders have pledged to donate 1 billion doses of coronavirus vaccine to poorer countries by the end of 2022. Boris Johnson's Tory government, for its part, has pledged 100 million doses.

The scale of these proposals does not rise to the level of an insult, and that is if they keep their promises!

World Health Organisation (WHO) research shows that it would take 11 billion doses - more than ten times what G7 leaders are proposing - to provide 70% of the world's adult population with two doses each. Even more vaccines would be required if countries begin vaccinating children as well. The head of the United Nations, Antonio Guterres, stated bluntly: "We need more than that".

Despite the immediate need for vaccines, of the 100 million doses Johnson has pledged, his government intends to provide no more than five million by the end of September, 25 million by the end of 2021, and the remainder in 2022. This is in spite of the fact that the UK could donate 20% of its available vaccines right now and still hit its domestic targets!

Following the announcement of the G7 proposal, the WHO's director-general, Dr Tedros Adhanom Ghebreyesus, reiterated that a waiver of the intellectual property rights underpinning vaccines is "essential" to achieve their target of vaccinating 70 per cent of the world's population by next year's G7 summit. He added: "The [pharma companies] should not be going for high profits."

Ghebreyesus' demand follows recent Oxfam research suggesting that developing countries could be vaccinated against Covid-19 at a cost of just £4.6 billion if pharmaceutical companies waive their intellectual property rights.

Estimates put the cost at ten times that amount without a waiver, with the extra money going straight into shareholders' pockets.

The chief executives of Moderna and BioNTech have reportedly increased their wealth by at least £4 billion each in 2020, despite the research and development of the vaccines being heavily state-subsidised.

It is precisely because patent monopolies are so profitable for pharma companies that waivers will not be yielded without a fight.

The current opposition of the British and German governments to the WHO's modest waiver demand demonstrates this, and shows how sick the capitalist system is.

Society has the resources, both financial and technological, to defeat the Covid-19 pandemic. But under capitalism these vast resources are owned by a tiny elite, and their profits are prioritised over people's health.

That's why it's vital that large pharmaceutical companies are nationalised under democratic worker's control, so that vaccine science can be shared with the primary purpose of helping people not making profit, and the production of vaccines can be democratically planned to meet the needs of all.