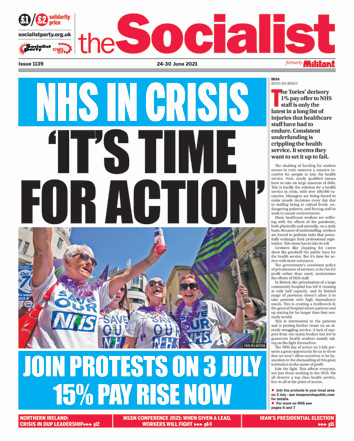 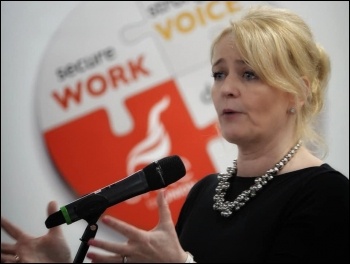 The Socialist Party is supporting Sharon Graham for Unite general secretary. The ballot opens on 5 July. Many of the most combative workers are increasingly being drawn towards her campaign as they look to resist the growing offensive of the bosses.

It is no accident that the lead reps in the successful strikes on Manchester buses and Thurrock bins against their employers' attacks, such as 'fire and rehire', are supporting Sharon, as are the rank-and-file construction electricians, recently victorious in their battle against the bosses' deskilling agenda.

We argued throughout the long pre-election period and during the nomination stage for there to be one fighting left candidate. We have not accepted that the United Left (UL) candidate Steve Turner is capable of playing this role.

At the UL hustings last summer, in response to Howard Beckett's attack on Sir Keir Starmer moving Labour to the right, Turner pointedly distanced himself, saying that a Unite general secretary isn't an attack dog but has to be in the background doing deals. This would be a retreat from the position of Unite under Len McCluskey, in standing up to the Labour right.

Just before nominations opened, in the Huffington Post on 28 April, Steve Turner criticised the leverage campaign of Sharon's organising and leverage department to supplement the Manchester bus strike by putting pressure on Labour mayor Andy Burnham to directly intervene in the dispute: "I want to see Labour councillors elected on May 6. I want to see Labour mayors. And it frustrates me, it angers me sometimes, that some of the union's campaigning right now is pitched against our mayors, against Sadiq Khan and Andy Burnham. What's that all about? I find that incredible that we would do that."

Yet that action, supplementing the 85 days of strikes, was part of the victory of Unite members on the buses. Would that have been possible if Turner had been general secretary, with his approach of being prepared to put the union's relationship with Starmer's Labour before Unite members?

Come together behind a left campaign

We argued for Sharon and Howard to come together and unite around one candidate on a militant industrial and political programme. This would have electrified the election campaign.

Therefore, it is a serious mistake that Howard Beckett has withdrawn in order to support Turner. There will be Unite members who genuinely believe that this is necessary in order not to split the vote, given that right-winger Gerard Coyne has succeeded in getting on the ballot paper. But the best way to avoid this would have been for Howard to unite with Sharon. That in turn would have put pressure on Turner to withdraw.

Some argue that Steve Turner is the ordained left candidate after winning most nominations. But a joint candidature of Sharon and Howard Beckett would have had 677 nominations to his 525, with branches representing 380,000 members compared to Turner's tally of 270,000.

Moreover, the most effective way to take on Coyne's populism - his posturing as a 'voice of the ordinary worker' against the machine - is through a fighting programme that can appeal to the broader layers of Unite members, who don't normally vote in the union's elections.

The joint statement of Steve and Howard promises a 'blended manifesto'. But how, for example, will the opposite standpoints on Starmer's Labour leadership be merged? Should Unite be prepared to 'pitch campaigns' against right-wing Labour politicians attacking Unite members, or not?

We agree with Sharon's desire to make the union more industrially organised and ready for action, including building and extending shop stewards combines. We also support her promise that Unite should "oppose any local authority, including Labour, if they attempt to force through cuts to jobs and services after Covid-19 and beyond... and support candidates who oppose cuts to Unite members' jobs and services and councils and councillors who fight against them".

These are welcome pledges. In our view, it is important that Sharon's campaign does not attempt to avoid the political issues, but instead confronts the reality of Starmer's pro-capitalist leadership of Labour. This will pose the need for a left, anti-austerity political vehicle for workers that will be attractive to Unite members as they come into collision with the 'Westminster brigade' of Starmer and the cutting Labour councillors.

The fighting programme that is needed is still possible and can win this election. That is why the most fighting members in the union must unite around Sharon's campaign. This should include those who were attracted to Howard's campaign, particularly his opposition to Starmer.

Such an election campaign can become a pole of attraction to all those who want to build on Len McCluskey's leadership rather than retreat from it. It must be the basis for a new fighting and open and democratic left within Unite, which will be necessary whatever the outcome of this election.