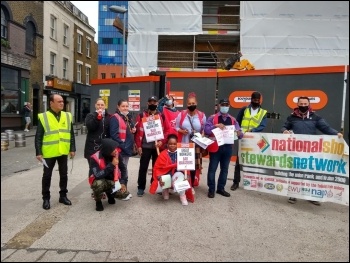 Privatised catering workers in Whitechapel, east London have had enough. There's too few staff and no respect.

Tight, inflexible rotas mean childcare and college courses become impossible to arrange. Workers no longer get a proper weekend, with days off separated. Bosses imposed this new rostering system with no consultation.

And outsourcer Serco, the employer, deals with problems by bullying the staff. Workers can expect to be punished in the already brutal rota, or face aggressive use of sickness absence policies.

These are workers who prepare and distribute food throughout the hospital. It's one of countless crucial jobs for the health service. And like for so much of the working class, it's put them at risk in the pandemic.

It is the working class in all sectors that has carried society through Covid. In workplaces on the front line of the pandemic short staffing, poverty pay, intolerable workload and management bullying are everywhere.

"We're not asking for much" said Unite union rep John, rallying pickets on Friday 25 June. "We're not even asking for pay" - although that could be the next fight, with outsourced workers' wages 15% behind directly employed counterparts. "We want proper rosters, an end to bullying, and Serco out!"

Like the government, Serco has offered all its workers in the Barts health trust, which includes Royal London, St Bart's and Whipps Cross hospitals, a derisory 1% pay offer. Unite is consulting all Serco members on whether they too are prepared to take strike action.

Early morning picket lines have reminded management of the workers' presence, with deafening blasts on vuvuzelas and protest songs on the sound system. The first round of stoppages, Monday 21 to Friday 25 June, was rock solid. More action is planned for Monday 5 to Friday 9 July.

Serco management has tried to intimidate workers by filming picket lines and standing, sneering by their strike rally on Thursday 24 June. Strikers and supporters put them in their place with loud chants of "shame on you!"

Protests against Tory ruination of the health service are due on Saturday 3 July. A good start from the union leadership would be building towards national industrial action to win a 15% pay rise across the board.

NHS workers are tired and angry. A serious, fighting programme of action could give us a thousand Royal Londons, and rescue our health service from the Tories.