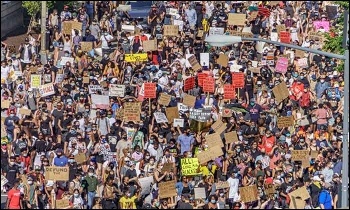 It is truly a historic victory, specifically of India's farmers but also of the larger working masses against the BJP regime.

These laws were a savage neoliberal attack to facilitate the takeover of India's agriculture by corporate capital.

The farmers' agitation that began last year was a historic development: perhaps for the first time in the past seven years any such movement had pushed the authoritarian regime of Modi onto the back foot.

The regime that could in other instances mobilise chauvinist hysteria to quell any opposition to its policies did not bear fruit this time.

The grand spectacle of the struggle captured the imagination of the masses and evoked massive sympathy and support across the country.

That the Modi regime was acting as an agent of corporate capital - symbolised by the two capitalist tycoons Mukesh Ambani and Guatam Adani - was generally understood by the masses.

The fundamental antagonism between the interests of capital and that of the working class and poor masses manifested itself starkly in the farmers' struggle.

Such a movement arose at an historic juncture, namely the Covid crisis. The pandemic only exacerbated what had been otherwise brewing up as a structural crisis of capitalism. The pandemic pushed the economy, already reeling under a series of blunders by Modi over the past few years (demonetisation, Goods and Services Tax, etc), off the cliff.

While the plight of migrant labourers became the symbol of the misery caused by Modi's reckless pandemic lockdown, it was by no means limited only to it. A whole cross-section of society, including the petty bourgeoisie (small traders, farmers, etc), was deeply impacted by the economic turmoil and could see no end to it.

The long-term pent-up discontent among the working class and masses is the primary reason that the farmers struggle could evoke mass sympathy and support.

The BJP regime, banking on its majority in the parliament along with the so-called personal charisma of Modi, expected to crush the resistance of the farmers. Belying such arrogance of the ruling regime, the farmers' protests consolidated into an historic and long-sustained massive sit-in strike by hundreds of thousands of farmers at Delhi's borders.

The agitation that started on 26 November last year, far from waning, would only get stronger over the coming months. After initial talks, when it became clear that farmers unions would take nothing less than complete rollback, the Modi regime resorted to all kinds of dirty tactics.

The farmers call of 'Chalo Delhi' (march towards Delhi) itself marked the showdown. Thousands of farmers braved police water cannons, batons, and barricades made to stop them from reaching the capital.

As thousands of farmers encamped at the outskirts of New Delhi, with thousands more joining them over the following weeks, the agitation grew stronger, making the central government yet more desperate.

Later, with an army of internet trollers and a bunch of media houses controlled by the regime, the BJP waged a massive smear campaign to discredit the farmers' agitation. It went even to the extent of barricading the whole protest site with a heavy deployment of police and security forces.

Lakhimpur Kheri in the state of Utter Pradesh (UP) was another graphic display of brutality unleashed on protesting farmers. Here the son of a BJP federal minister drove his car into protesters, killing eight of them in the process.

So far, at least 700 farmers have lost their lives during the agitation. However, such brutal measures aimed at intimidating the protest would only prove counterproductive; they created more determination among protesters to continue the struggle.

Modi's BJP party is facing state elections in UP and Punjab in the coming months and this is another reason behind the government's somersault. However, this may not help them regain enough support, particularly in Punjab.

The Modi regime is the most vulgar form of capitalist rule seen in India in recent times. It has carried out a reckless neoliberal assault at the behest of corporate capital.

The passing of the farm laws and new labour codes last year were a savage attack aimed at reducing the working class to slavery conditions and bringing agriculture - which employs 60% of the country's labour force - under the domination of corporate capital.

New labour laws undermined existing labour laws, which already failed to meaningfully protect workers. Aggressive neoliberal measures adopted by the Modi government - like the large-scale privatisation of key sectors of banking, railways, and opening up of the public sector to private investment - are aimed at dismantling whatever meagre public control existed over the means of production.

But more importantly, it was a savage attack on the working class at its strongest link. The trade unions in private factories and private service sectors have been consistently weakened over the last three decades. The sheer fragmentation of the production process, outsourcing, and neoliberal onslaught, had resulted in weakening the bargaining power of workers in the private sector.

In comparison, the public sector trade unions are still strong. However, the measures of privatisation and so forth were a direct assault on these workers. In response, there were trade union struggles as well as general strikes called by the central trade unions.

In sectors like banking, the sheer pressure of workers pushed BMS (Bharatiya Majur Sanghatana - a trade union affiliated to the ruling BJP) to participate in a strike called by bank workers. The 26 November 2020 general strike upheld the demands of the farmers' movement along with those specific to workers.

The momentous victory of the farmers has, at least for the time being, successfully repealed the attempted takeover of agriculture by corporate capital.

The victory holds the promise that sustained movements by the working masses could defeat the brutal BJP regime and its savage attacks made in the interests of its master, the capitalist class.

However, it is necessary to take the momentum gained by the victory to consolidate the ongoing struggles by various sections of the working class into a larger political force. One that challenges the prevailing capitalist system and the rotten political class which oversees capitalism.

Back in December 2019, a massive anti-Citizenship Amendment Act/National Register of Citizens struggle had opened up a new movement, in particular, of young people. The liberal sections of the middle class were pushed out of their comfort zone to take part in the agitation.

The BJP regime, by mobilising communal chauvinism, was able to quell this movement in the short term. But in the longer term it only further frustrates the working masses reeling under the ongoing crisis.

The very objective conditions in society have thus paved the way for a larger political movement against capitalist order. This of course could be done only by the working class under the leadership of a revolutionary party.

The farmers' agitation and the acute objective situation offered an opportunity to build a wider political agitation. And while the rise in trade union struggles is a welcome step forward, they are insufficient in themselves.

And although the political landscape continues to look bleak, and the opposition forces too weak to capitalise on the current momentum, nonetheless, the working masses have shown the courage to push aside these restraints and lead their own struggle.

It is out of these rumblings of discontent that we could see an alternative socialist force emerge offering a programme to lead the struggle forwards.