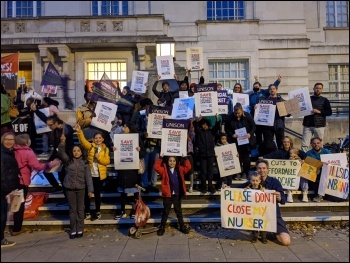 The campaign to save Fernbank and Hillside Children's Centres in Hackney, east London, has won.

"This was only achieved by a massive campaign by the parents and staff against these closures and the loss of over 100 children's places and over 30 jobs.

"This is a significant victory, but is only one battle in what may well be a war against other cuts. We do not just want a pause, but a commitment to no closures."

"When asked to send a written apology to all staff for the stress and anxiety caused over the last two months... [the council] refused. This has created widespread mistrust in the council.

"This stress and anxiety will now be transferred to eleven children centres, with a wider review next year. Hackney Unison, along with the parents' campaign, will continue to call for no cuts to take place in children's centres provision. This is a vital and valuable service that is irreplaceable."

"It's the view of Hackney Unison that central government cuts to council spending should not be passed on. We acknowledge that the cause of the council to even consider cuts is ten years of Tory government austerity. But we believe there is an alternative.

"This would be to draw up a legal, needs-based budget, bringing in contributions from the local community as to what that should include. If several councils did this, they could then present a united front to this government - stating this is what we need and this what you need to provide.

"If Labour councils don't do this, we will lead a mass campaign, involving all those in the local community, from trade unions to community groups and the wider population. This may require a mass demo of tens of thousands to Downing Street to deliver what we need.

"This victory was on the back of a lively and enthusiastic lobby of the full council in October, including parents, children, staff and trade unionists on the town hall steps. Such was the publicity that the campaign generated, nearly 900 completed consultations were sent in to the council, with the overwhelming majority opposing cuts.

"Alongside the massive public campaign by parents, Hackney Unison was starting to ballot its members at Fernbank and Hillside to take strike action, if the council did not stop these closures.

"In the run up to the local elections in May 2022, Hackney Trade Unionist and Socialist Coalition (TUSC) has organised a People's Budget meeting for Wednesday 8 December. Natalie Aguilera, one of the parents leading the children's campaign, will speak alongside myself.

"Together with Socialist Party members, who will stand as anti-cuts candidates, we would like to invite campaigners from the local community to also join us to ensure a voice is given to all those fighting against any proposed council cuts.

"Over the last six weeks, staff and parents have bought scores of copies of the Socialist. They have appreciated the coverage the newspaper has given to this campaign."