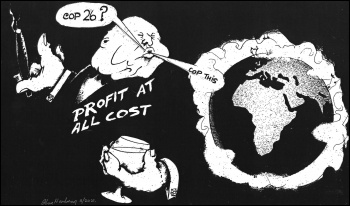 After tens of thousands marched and walked out in Glasgow and across the world in response to the failure of the UN COP26 summit, many are discussing what next for the climate strike movement.

The situation is critical. Major capitalist powers, despite all their rhetoric around the Glasgow Climate pact, are stepping up oil production and using reserves to combat an energy price hike. How is mass pressure going to be built to fight for the aspirations of the climate movement when the capitalists meet again in Egypt for COP27?

Millions of radicalised youth and workers globally see straight through the empty pledges of the capitalist politicians and have absolutely no trust in them.

This is reflected in the slogans pointing towards the need for systemic change such as 'uproot the system' raised by the majority of the youth mobilised for the strikes. It shows a rejection of capitalism, as a rotten failed system, that exists in the consciousness of many young people.

The capitalists internationally are bound by the need to make short-term profits. A rapid, organised transition away from fossil fuels is not possible in a system based on ruthless economic competition, not only between industries and companies, but also nation states.

As we saw with the Glasgow Climate Pact, bigger richer capitalist powers want to protect their access to markets and are not willing to bail out weaker capitalist nations.

The Committee for a Workers' International (CWI), including Socialist Party Scotland in Glasgow, got an electrifying response for our unique poster slogans of "let's build a working-class mass movement for socialist change to end climate change" and "you can't have capitalism without climate destruction, fight for socialism".

These were among the most popular placards seen throughout the Glasgow demonstration. Most importantly, many young people wanted to find out about what socialism actually means and signed up for more information.

Many young people agreed with our speakers at the COP26 mobilisations when we explained "you cannot control what you do not own". Real systemic change is only possible on a socialist basis where the economic means of producing commodities, resources and wealth are owned and democratically managed by the working-class majority.

The strike of bin workers had a major impact on the COP26 summit, forcing the SNP council to make concessions. The Scottish government also had to intervene in the Scotrail dispute to avoid a strike by the RMT union that would have shut down major transport links to the summit.

This shows the potential power of the working class when mobilised. By taking strike action, organised workers can stop the source of bosses' profits, and therefore represent the force that can challenge the profit-driven capitalist system. It's vital that the climate strikers link up with the workers' movement, as this is the only way a victory in terms of real socialist change to end climate destruction can be won.

We also found an extremely positive response among youth, even if not among all layers on the demonstrations, to the idea of concretely linking up with trade union struggles. Our petition in support of the Glasgow GMB bin workers' strike, which was underway against the SNP council over low pay, was popular.

In a step forward, Greta Thurnberg invited striking workers to address the youth strike for climate rally, although she herself did not visit picket lines.

Greta made pertinent points in Glasgow about the incapacity of capitalist world leaders to solve climate change. But her public petition calling on the UN to declare a "system-wide climate emergency" can really only have the same limited effect as individual governments, such as the Scottish SNP government, declaring climate emergencies and taking no real coordinated action with no real accountability.

We would say to Greta Thurnberg, we can have no faith in the UN and capitalist institutions, only in the power of workers and youth mobilised in fighting to change society globally.

Extinction Rebellion (XR), who proudly describe themselves as being "beyond politics", in response to the COP26 failure have called for "mass civil disobedience" across the UK in the spring of 2022.

Socialists are in favour of mass civil disobedience that mobilises the collective power of the working class. Our predecessor Militant led the mass non-payment campaign against the poll tax that brought down Thatcher, from which many lessons can be learned. In that struggle, mass collective power of working-class communities was mobilised to disrupt the court and judicial system in towns and cities across Britain, with mass meetings, court representation, picketing and demonstrations.

Unfortunately, some mobilisations of groups like XR and Insulate Britain rely on small numbers of activists blocking roads or transport where commuters are indiscriminately targeted. Often these actions have been counterproductive in alienating workers trying to travel to and from work.

The blocking of roads and the causing of maximum disruption can be justified when targeted at the enemy - the bosses, as it was when the rank-and-file electricians used this tactic along with mass picketing to defeat the imposition of the Besna contract in 2012 and recent attempts by bosses to deskill the industry.

Such actions, and of course mass picketing and blocking of scabs during the miners' strike and other major working-class battles, won mass support. But the indiscriminate nature of the XR and Insulate Britain actions, not targeting for example fossil fuel bosses, and their lack of a programme to win over workers, makes them ineffective and undermines the building of a mass movement.

Socialists oppose the police and legal repression, including the recent lengthy jail sentence, and restrictive court orders imposed on XR, Insulate Britain and other climate activists. We raise the need for full democratic discussion in the movement about what mass actions are the most effective in targeting the big business polluters. Also, that the movement organises democratic stewarding against attacks by the state on the right to protest.

The climate school strike movement that began in 2019, after a lull during the height of the pandemic, has the potential to escalate in size and strength if the correct clear slogans are put forward. A democratic fighting union, that struggles on the climate and all the issues young people face, is needed in every school and college. It is necessary for the movement to adopt clear socialist policies and link up with the trade unions and workers' movement.

There is a danger that if this approach is not taken, if the movement does not develop beyond vague calls for system change, and if effective tactics to escalate the strikes and protests are not adopted, then the movement can again begin to wane.

Currently, the most common slogan at climate strikes and protests is "system change to end climate change". This limited slogan was even put forward by NGOs and religious organisations at COP26. But it was also echoed by some on the left. Rather than explaining the need for a socialist alternative and what socialism is to the thousands of young people thirsty for ideas at these mobilisations, they adapted to the broad nature of the climate demonstrations. This approach does not point the way forward for the movement.

A number of national UK trade union leaders circulated a public letter during COP26, demanding the world leaders at the summit listen to and meet workers and trade unions before agreeing a deal. While, of course, it's important to raise that the workers' movement must have a voice, there cannot be any illusions that the capitalist politicians at COP26 will listen.

A more effective approach would have seen the union leaders coordinate a public statement exposing the greenwashing by the politicians and corporations at the summit. The example of workers at the GKN plant in Birmingham who have had their alternative green production plan rejected by bosses, could have been cited. There is a need for the trade union leaders to coordinate workers in strike action over pay, jobs and terms and conditions. Such mass action could pull mass support from the youth climate strike movement and be a reference point for young people fighting for their future.

COP26 also exposed that a political alternative is needed. None of the SNP, Starmer's Labour or the Greens are willing to meet the demands of youth and workers on the climate, tied as they are to capitalism and implementing Tory attacks.

A key arena to build the climate movement could be in local council elections in 2022. Young climate strikers should stand as anti-cuts candidates alongside trade unionists and working-class community campaigners. The Trade Unionist and Socialist Coalition (TUSC), which the Socialist Party and Socialist Party Scotland participate in, is preparing to stand, putting forward socialist policies that councils could implement to combat climate change, such as public ownership of transport and no-cuts budgets to fight the Tories for more funding for services. This is a step towards building a new mass workers' party to fight for socialist policies.

A mass party of the working class, in Scotland, Britain or elsewhere, prepared to fight for a programme of nationalisation, investment in public transport and a socialist transition away from fossil fuels, would be a huge boost for the climate movement. It would apply massive pressure on pro-establishment politicians at future COP events, and help to develop the understanding of millions of youth about what kind of 'system change' is needed.

The CWI fights to assist in building such mass parties internationally, and for them to adopt a rounded-out socialist programme based on the public ownership and democratic control of the banks and major industries. With this, the working class, together with young people, could begin to plan production in the interests of people and the planet, not profit.

We disagree with those in the environmental movement, and even on the left, who write off workers in the fossil fuel, nuclear and defence industries. It is possible to oppose new fossil fuel extraction, nuclear power and Trident and actively support workers fighting back in those industries.

Hundreds of thousands of jobs in Scotland and the UK as a whole are currently dependent on North Sea oil and gas. The Scottish Tories are using SNP Nicola Sturgeon's recent U-turn in now opposing the new Cambo oil field to whip up fears in working-class communities about the climate movement. Only outlining a worker-controlled socialist transition can answer this, combining the call for nationalisation of these industries with a guarantee that jobs in publicly owned renewable energy would have better pay, safety and terms and conditions. The National Shop Stewards Network (NSSN) put forward such a program at its workers' forum during COP26 with trade union reps from the North Sea industries.