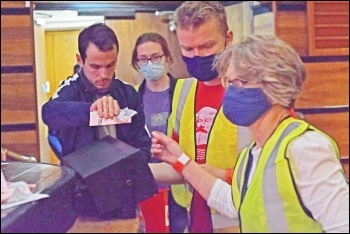 The Roman orator and statesman Cicero described finance and resources as 'the sinews of war' - and of course the same applies to the struggle for socialism.

So, with a month to go, and an unofficial Swansea and West Wales Socialism 2021 fighting fund appeal target of £1,000 to meet, a coordinated and sustained campaign was the order of the day.

A bit daunting for a newly elected fighting fund organiser who was promptly reminded that Swansea branch and Wales as a whole haven't missed a target in 30 years. No pressure then!

Building on a long Swansea tradition of taking the fighting fund seriously, the first step was to send out an email to all members giving details of the appeal and emphasising the importance of Socialism 2021 as our main public event of the year.

Step two was to contact members by email, text, phone or in person to ask them to pledge what they could afford. There was a ready response with many members pledging what they could barely afford.

Currently we have £1,080 in pledges and we are spending the next week or so contacting the few members who have not yet made a pledge.

The benchmark was set high with a number of longstanding members pledging £100.

One fairly new member immediately pledged £75. She described how impressed she was with the Socialist Party and its determination to make a difference.

"The political and economic situation in this country is in such a state. With the Labour Party back to being part of the establishment and offering no solution it is easy to despair.

"Since joining the Socialist Party it has been heartening to campaign with people who are principled socialists and who are determined to play their part in defending our communities and fighting for socialism.

"It is so important to have the resources to build our party. I am optimistic about our future."

New recruits and younger members, many of them low-paid, unwaged or on student loans, and at the sharp end of the capitalist crisis, also made generous pledges.

One said: "We just cannot go on like this. No-one else is going to save us, it's up to us to build the Socialist Party."

We look set to smash our fighting fund target once again. Phew!