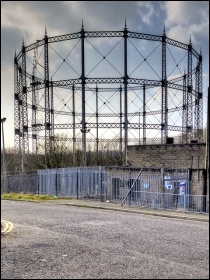 Britain's seventh-largest energy supplier, Bulb, has gone bust. It has been put into special administration amid the continuing disaster of the privatised energy sector. Bailed out by a government loan of £1.7 billion, Bulb will now be run by administrator Teneo until a buyer can be found, or until its customers are moved to another supplier.

The government says this is to "support customers". But the reality is that, yet again, taxpayers' money is bailing out the private sector while working-class people continue to face extortionate energy costs.

There is no guarantee that the loan will ever be paid back, and certainly no guarantee that Bulb's customers will be 'supported'. Bulb is the 23rd energy company to fail since the summer, and it's clear to many that the private energy industry itself is a failure. After keeping society running throughout the pandemic, the working class is now rewarded with countless attacks on living standards - the sharp rise in energy bills being just one of them.

Government regulator Ofgem's raising of the cap on energy prices affects 3.7 million people, and this includes those who use a prepayment key, often among the poorest, many living in criminally overpriced privately rented accommodation. With the cost of living rising across the board, more and more people will be experiencing the terrible sinking feeling of having their lights go out and knowing there is no more money to put in the meter.

If it's taxpayer's money being used to bail out Bulb, why don't we own it? If Bulb along with the rest of the energy sector was taken into public ownership under democratic workers' control, energy prices could be set by committees of workers and services users - in the interests of workers and service users, not the bosses.

The Socialist Party calls for socialist nationalisation, with compensation paid only on the basis of proven need. The big shareholders and CEOs have already made more than enough money ripping off their customers and should not be paid a penny. For people to be cold and hungry in their own homes in the fifth richest country in the world is a searing indictment of the capitalist system. Enough bail-outs for the rich, it's time to fight for socialism.