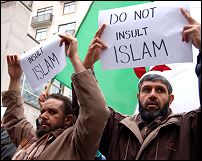 The disparaging images have added to the enormous anger amongst Muslims against Bush's 'war on terror' and the occupation of Iraq.

However, the issue that has sparked off these protests and their character has renewed discussion about a 'war of civilisations' or of 'cultures'. These developments are a sharp warning of the divisive tensions that can develop in the absence of a strong workers' movement offering a socialist alternative.

Millions of Muslims, embittered by the policies of Western imperialism, have seen these cartoons - which suggests Muslims are terrorists - as the latest in a long series of provocations and aggressive acts, not least the occupation of Afghanistan and Iraq and the toleration of Israel's settling of more and more Palestinian land in the West Bank.

In a number of Arab countries the protests have taken on at least a partial anti-imperialist character, although it appears that the Syrian regime has, for its own interests, used the protests to give a warning to the west and at the same time reassert its interests in the Lebanon.

In European countries, including Britain, there is also a groundswell of resentment amongst Muslims against a perceived increase in anti-Islamic feelings, greater police surveillance and harassment.

In Denmark, where the cartoons were first provocatively published in a right wing paper, many Muslims feel threatened by a series of special tough anti-immigrant laws that have been passed since 2001 by the Rasmussen government.

This government, which depends upon support from the far-right Danish People's Party, has banned immigrants under the age of 24 from marrying and is also excluding from Denmark the husbands or wives of Danes who are not citizens of an EU country.

Faced with what they see as a continuous campaign of vilification in the media and increasing harassment many Muslims have protested against the publication of these cartoons.

The fact that it has been mainly right-wing journals which have republished them is seen as confirmation that there is a deeper right-wing political agenda.

However the character of some of these protests, coming after a series of terrorist attacks on Western civilian targets, has reinforced the tendency of deepening divisions between Muslims and non-Muslims in a number of countries.

In Britain, the extremely sectarian religious placards threatening "death" to non-Muslims carried on the small 3 February protest in London can deepen racial and religious divisions, as well as providing the government with arguments to justify its authoritarian and anti-terror laws.

This is in a situation where already there are European-wide pressures and tensions produced by the transfer of jobs and forced migration resulting from the effects of capitalist globalisation and the bosses' ongoing neo-liberal offensive.

From all sides opportunists, religious sectarians and racists have jumped in to exploit the situation. In Arab countries, right wing Islamic religious leaders are taking the opportunity to reinforce their claim to be leading the opposition to imperialism and also strengthen their grip on society.

The official attempts to calm down the situation may have an effect in the days ahead but the underlying tensions will not be removed by soothing words and appeals to reason.

What has been absent in the last few days has been a powerful socialist voice that can independently intervene in this situation and prevent its exploitation by religious sectarians or racists. Unfortunately this is not surprising given today's political weakness of the workers' movement in many countries.

But, unless the workers' movement internationally can offer a way out, the next period of social crisis could see societies being torn by a myriad of divisions involving religious, ethnic and national conflicts.

What then should be the socialist response to the current wave of protests and the attempt of conservative and some right-wing Christian political leaders to claim that they are defending free speech?

Firstly, socialists stand completely opposed to the oppression based on religion, race, nationality, gender or sexual orientation and socialists support the right of the oppressed to defend themselves. We work to build a united movement of working people to fight oppression, capitalism and start to create a socialist future.

This means we oppose the production of any material that is used to create or deepen religious, ethnic, national or sexual divisions. This includes countering the continuous anti-immigrant racist propaganda or sub-text that can be seen in parts of the mass media in almost every European country.

At the same time, it has always been the workers' movement that has been in the forefront of the struggle to win and defend democratic rights, including free expression and the right to vote.

While opposing the production of racist or fascist material, socialists defend the right to make criticism, even sarcastic criticism. The same cannot be said for the main established religions that have all, at various times, stamped upon the free expression of ideas.

The attempt to say in Europe and the USA that what is developing is a 'clash of civilisations' between Christianity and Islam, with Christianity representing freedom, is completely false.

For the majority of their existence the tops of all the established Christian churches were quite happy to be part of the elites running dictatorial societies. As even the Financial Times commented: "The 'Christian' west won through to modernity in the teeth of clerical reaction."

The millions killed in warfare between different Christian denominations, the Inquisition, slavery, the slaughter of native Americans and the original witch-hunts are just a few of the historical crimes of the leaders of the Christian churches.

But this is not just the case with the Christian churches, leaders of the other main established religions have played similar roles, whether it be Jewish religious leaders justifying the expulsion of Palestinians from their homeland on the grounds that God gave the land of Israel to the Jews or prominent Buddhists being in the forefront of the attacks on Tamil Hindus in Sri Lanka.

While the Western media make frequent references to Islamic fundamentalists, Islam is not by any means alone in having extreme fundamentalists within its following.

In India, Hindu fundamentalists have repeatedly led attacks on the Muslim minority, like the 1992 destruction of the mosque in Ayodhya or the 2002 Gujarat clashes. 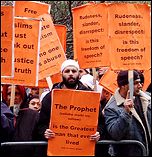 Socialists oppose all racist, religious or sexist attempts to sow divisions. Socialists advocate workers' action against such attempts and strive to achieve a united struggle of working people against oppression and capitalism.

Socialists defend the rights of both non-believers and believers, regarding faith as a personal issue and see no problem in believers and non-believers struggling alongside each other in the workers' movement. On the contrary, socialists strive to unite all working people in common, collective struggle.

But, by the same token, seeing faith as a personal issue means that socialists support the complete separation of church from state, the right to polemicise against religion and oppose the attempts of any religion to dictate to other religions or non-believers.

We defend the democratic rights of all, non-believers and believers, to express their views. This includes the right to produce anti-religious material, whether it is philosophical or satirical.

This is why socialists opposed the attempts of Christian fundamentalists to ban the Jerry Springer musical and the 2004 attacks by some Sikhs on the performance of the play Behzti in Birmingham.

Socialists resist all attempts to stigmatise Muslims but at the same time combat the attacks of vicious Islamic reactionaries against gays and the rights of women.

Equally, we oppose the anti-Semitic material produced under the guise of opposing Israeli policy in many Arab countries.

Most of the Islamic states that have protested against the Danish cartoons are dictatorial regimes with brutal histories of oppressing their own populations.

Today, a critical task before the workers' movement is to prevent divisions amongst working people blocking united struggles.

This means defending democratic rights and opposing repression, while striving to build a unified movement that can challenge capitalism and fight for a socialist future.

November 24: International protests against executions and to support political prisoners in Iran