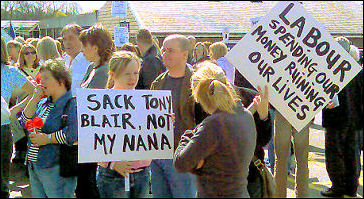 Demonstration in Stoke against NHS cuts earlier this year

NHS WORKERS, patients and members of the public will march in Birmingham on Saturday 15 July. They will come from all over the Midlands and beyond.

The University Hospital of North Staffordshire is set to lose 1,200 NHS jobs and 160 beds. Thousands more have been announced across the Midlands including 820 at Sandwell and West Birmingham NHS trust. The savage cuts are being repeated nationwide. Unless we fight back, our health service will be decimated.

New Labour's big business friends are circling like vultures at the prospect of the rich pickings to be had through privatisation.

Even before all these attacks NHS staff are working flat out just to keep pace with their workload. Staff leaving are not being replaced, patients still lie on trolleys for hours, wait years for treatment and in some cases are being refused care.

A final year nurse at Birmingham's Queen Elizabeth hospital looked on the Web for local job vacancies when she finished her training and the nearest she could find was in Maidstone in Kent! Hospital bosses have been telling training nurses that they can get a job in Australia after they qualify.

This demonstration will be a major step forward in bringing together the many campaigns springing up across the region to defend our National Health Service. But why is it that the North Staffs NHS SOS Campaign is coordinating this demonstration? That's simple - because the big NHS trade unions are not!

UNISON, RCN and other unions have given support locally to many individual campaigns to defend jobs and closures. But why have these unions not called a national demonstration?

There is massive opposition to what Blair and his so-called Labour government are doing to the NHS. If all these cuts go through then the hands of the leaders of all the main health service unions will be stained with the blood of the NHS. They will never be forgiven by millions of people in Britain.

Why are they not balloting for strike action (making sure emergency cover is provided)? One day strike action or even the threat of it could force the government to back down, save thousands of jobs and beds, and in the long term protect the lives of many more patients.

And why are UNISON and other health service unions handing over millions of pounds of their members' money to New Labour? It's like paying someone to knock your house down!

NHS workers and others get ripped off in hundreds of ways already. We don't want to hand over more of our hard-earned cash so that Blair and his big business friends can get even richer. Far better to support those that are actually fighting to defend our NHS!

March to rally in Centenary Square at 1pm.