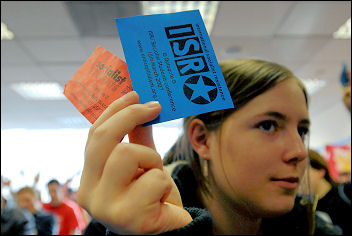 ISR NATIONAL treasurer Sarah Sachs-Eldridge introduced the opening rally by condemning the government's policies towards young people - including the sell-off of student loans to private companies. And now there is the introduction of a new device that uses high-pitched noises to ward off young people, as if they were animals.

The conference cheered as they watched a presentation on all the protests and campaigning work that ISR and Socialist Student groups had organised during the past year.

ISR national co-ordinator Ben Robinson gave a broad introduction on a year of increasing inequality but increased struggle across the world and Socialist Students national organiser Matt Dobson highlighted the cuts and attacks on education that have taken place.

There was a message of solidarity from Australian UNITE, a campaign to unionise low-paid workers in the fast food industry and a sister organisation of ISR.

THE FIRST two discussion forums were on 'Fighting for Rights at Work' and 'Campaigning to Defeat Fees'. 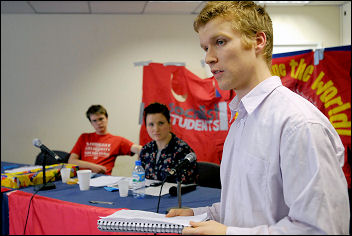 In the fees session, Matt Dobson said that after ten years of New Labour, students were beginning to fight back to save education with protests around the country. Like French students, students would need to link up with organised workers to win.

While the National Union of Students (NUS) is ignored, the Confederation of British Industry demanded more funding for science courses and got £75 million. We can't demand change from education minister Bill Rammell without the force of a mass campaign behind us.

NUS vice president Wes Streeting then said he was the leader of Labour Students but was critical of his party's broken promises over fees. But he argued the main campaigning focus should be on keeping the cap on top-up fees.

He said the NUS lacked the funds to call a national demo "at the drop of a hat". Instead of a demo he said that the campaign should use "creative campaigning" and function more like Amnesty International.

Dan Glass, president of Sussex university student union, condemned the role of the NUS. He said it was not a fighting union. Where were the demands to fund free education by taxing the rich and slashing the defence budget?

He supported non-payment of fees and protest action aimed at university vice chancellors. He raised the idea of occupying an entire campus and holding a week-long arts and community festival to protest against attacks on education. 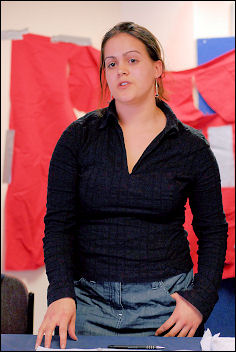 Hannah Walter from Durham Socialist Students spoke about their recent protests against unfair rent rises. Excessive rents and fees were driving working-class students away from Durham and 20-page forms made financial help difficult to apply for.

In the discussion many speakers attacked Wes Streeting's position and his support for the big-business Labour Party. The cap on top-up fees was "a sweetener in a poisoned pill" said Joe from Cardiff. He opposed the NUS slogan Keep The Cap.

James Kerr from Goldsmiths said that rather than just 'creative campaigning', struggles in the past year showed what we really needed was an active campaign with a lead from people like Wes.

Wes Streeting declared to cries of derision from the conference that he believed: "the Labour Party has been the only vehicle for progressive social change". But he then called the Keep The Cap slogan "defeatist and self defeating". He said that the NUS was already linking up with trade unions and applauded the general unity demonstrated at the conference.

Why I joined the Campaign to Defeat Fees

AMY MILTON, a mature first-year student on a four-year music course and a new Socialist Students member at Thames Valley university told MATT DOBSON how financially difficult it is being at university.

"It's a real struggle to survive each term and stay on the course. At present all my income is my loan and from that I buy everything from food to all my course materials. When I got here they told me about a 'great bursary' but it's only £300! That goes in a few weeks on essential things.

"So it's very difficult to be able to afford to have the 'privilege' of studying. What we need is a grant that is affordable to live on and that we don't have to worry about paying back.

"The rent at my halls of residence is really high. And then there's the cost of living in London. We're paying a lot of money but the heating never works properly and despite all the money spent on security, everything gets nicked!

"They spent millions on overhauling our campus. It looks very shiny and modern but what's the point if nobody can afford anything while they're here? It looks very impressive to businessmen but why not spend more money on the library and things that students need?

"I would like to be a full-time musician but now my main priority will be getting any kind of job so I can pay off this debt.

"I got involved in the Campaign to Defeat Fees because it's important somebody stands up to the government. It's disgusting that they say we should pay for university when they are getting cash for peerages from their rich friends.

"I hope we can get more people involved and organise more action not just on this campus but all over the country."

THE CAMPAIGN to Defeat Fees (CDF), initiated by Socialist Students, was set up to make sure students' anger is heard across the country and to organise this anger to build a mass movement to scrap all fees.

Socialist Students will be campaigning at the NUS Conference on 27-29 March for the NUS to build a mass campaign against fees and all New Labour's attacks on education.

Join us in the fight-back against fees! Build the Campaign to Defeat Fees in your university, school or college www.socialiststudents.org.uk/cdf

A SERIOUS attitude and a determination to struggle - it was this that characterised the forum on fighting for rights at work. 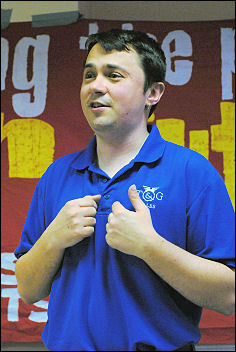 Rob Williams, a TGWU convenor, related his experiences of struggle in his workplace. Tracy Edwards explained about organising young workers in PCS and Jody Long spoke about unionising a workplace. They all explained the strategy that they had employed in raising workers' confidence and how this support and willingness to struggle is the most effective way of fighting the bosses' attacks.

Questions from the floor asked for more information on organising and gave examples of struggles the contributors had been involved in.

Sarah Mayo spoke about the ISR's Boost Our Pay campaign and called on everyone to get involved in the campaign and fight for rights at work.

THE CONFERENCE discussed and voted on motions to determine policy and priorities for Socialist Students and ISR's campaigning work over the next year and to elect the co-ordinating committees. 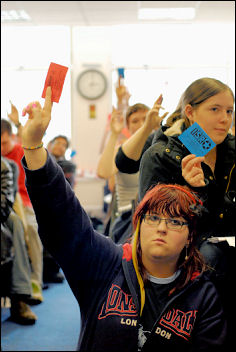 Motions were passed on relaunching the Boost Our Pay campaign against low wages for young people, on continuing to build the Campaign To Defeat Fees, and a variety of other topics including resolving to send a delegation to the anti-G8 protests in Rostock, Germany this summer.

There was a debate around the motion opposing the occupation in Iraq. The motion called for immediate withdrawal linked to the urgent need for independent working class organisations to fight against privatisation, corruption and sectarianism.

Some felt the vacuum left by the troops would worsen the situation but many argued that the occupation is far worse and no solution can come from US and UK troops or from the US and UK governments.

The vote went to maintaining the call for troops out now but everyone felt it was important that the issue was aired in an open and friendly way.

A motion on 'Building ISR' included targets to recruit at least one new member to ISR on each activity and to raise more funds.

Socialism and the environment

IN THE session on the environment the argument that 'market solutions' to climate change simply delay real action was put. A campaigning political approach is needed. Only democratic planning under socialism could make the massive structural and cultural changes to society to stop climate change.

The discussion tackled hard questions about the environment and Sean from Leeds pointed out that while it is vital to fight for change now, just backing every green move proposed by capitalist politicians would ultimately draw us into an approach which will never solve the problems of the environment.

A political voice for young people

ONE OF the commissions at the conference saw a discussion between Greg Maughan from the Campaign for a New Workers' Party (CNWP) and Colin Smith from RESPECT on the question of how young people can gain a political voice.

Greg described the contradiction between the numbers of young people actively engaged in campaigning and a relatively low level of electoral participation.

He explained how this was due to the fact that all three establishment parties represent the interests of big business. What we need is a new mass party that could act as a pole of attraction to workers and young people who are coming into struggle.

He also outlined some of the misgivings that many CNWP supporters have about RESPECT- including a lack of openness and democracy and the danger that RESPECT is too narrowly based.

Colin Smith outlined how RESPECT had come out of the anti-war movement and how this was the central issue in Britain today.

In the discussion Tracy Edwards, the PCS Young Members' Organiser, outlined work she had done for the PCS in Workington, Cumbria. She explained how in an area like that, due to high levels of unemployment and run-down public services, the war was superseded in people's minds by their immediate personal circumstances.

Unfortunately, in his reply, Colin Smith did not address this question and also did not acknowledge Greg Maughan's appeal to him to sign the CNWP's declaration for a new workers' party.

"The conference was good because different views were discussed in a friendly way. Everyone can have their say."

"They've got some really good speakers."

"It's good - there's free speech and everyone can have their say."

"It's cool to find out that there are so many other people from around the country who want to actively campaign."