Blair: No solutions to crime or crowded prisons

Commemorating the abolition of the slave trade

In The Line of Fire

Privilege and privation in our schools

How to stop the BNP: Build a political alternative

We shall not be moved!

Celebs fail to save Burberry

Greenwich: "We've got to strike" 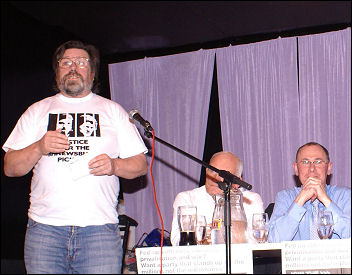 Based on the events of the jailing of Ricky Tomlinson and Des Warren by the Heath government in 1972, this programme gripped you by the throat from the outset.

During the official national building workers' strike in 1972 a number of strikers were jailed. While the media trumpeted hysterically about the violence of the pickets, they were actually charged under the Conspiracies Act of 1875. 230 other charges were thrown out.

The programme focused on Ricky Tomlinson and his narration clearly reveals the role of the state and its complicity with the big construction companies in securing the conviction and jailing of six workers.

The two wings of the state, the government and the judiciary, clashed on how to handle the issue. Ricky revealed that just prior to sentencing, Downing Street, fearing an industrial movement in defence of the building workers, sent a message to the judge urging him not to jail them. However, this message was ignored.

The employers, the police and the Special Branch, were determined to make an example of the pickets. The Special Branch were particularly gung-ho, arguing that, in the language of the Cold War, the strike was inspired by the Communist Party as part of a revolutionary strategy. Ricky produced a Special Branch report of 1972 that 35 years on, still has key passages blacked out on the grounds of national security. It would be comical if it weren't so sinister.

As a testimony to the impartial, investigative nature of the programme, Ricky spoke to a strikebreaker based in Stoke at the time. "Five coach loads of scouse yobs came to Stoke to terrorise building workers into joining the strike," he declared. Rather humorously, Ricky told him that couldn't have happened as no Liverpool pickets went near Stoke during the strike.

In another incident, Ricky visits a self-confessed strikebreaker called Grocott to give him the opportunity to explain himself. In a clearly set-up situation, Grocott refused to shake hands with him on the grounds that it would prove he was wrong to scab and to give evidence on behalf of the employers. Ricky produced a photo that shows the scab looking very healthy at a meeting after allegedly been beaten up by the flying pickets!

The employers' propaganda machine constantly described the strikers as men of violence. Strange then that at the Shropshire building site which received the most publicity, with a squad of police in attendance, not one picket was arrested. Yet the police could not be accused of not being on the alert as the same evening, according to the local paper which Ricky read out, an ice-cream seller was arrested for sounding his bell after 7pm!

They were jailed under the Conservative government, led by Edward Heath, and kept in under a Labour government with future right-wing defector Roy Jenkins as Home Secretary rejecting every appeal for early release. Ricky spoke movingly about Des Warren, who later died from Parkinson's syndrome induced by his treatment while in prison.

The programme could have included much valuable footage, which had been assembled by the programme producers working with the Shrewsbury campaign team. Very little of the interview material with building workers involved in the strike was used.

Nevertheless, the impartial viewer would conclude that a real injustice was perpetrated. On that score the programme marks an important step in the campaign for justice for the Shrewsbury pickets.

Blair: No solutions to crime or crowded prisons

Commemorating the abolition of the slave trade

In The Line of Fire

Privilege and privation in our schools

How to stop the BNP: Build a political alternative

We shall not be moved!

Celebs fail to save Burberry

Greenwich: "We've got to strike"