Fighting the onslaught on public services 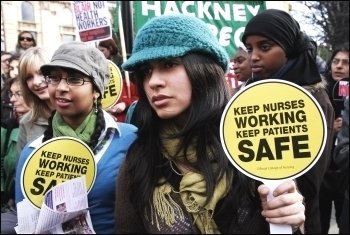 So much for New Labour's attachment to education and "no cuts" to the NHS. In the north west, private sector employment has been hit by the recession, in many cases even harder than the national average. Now working-class people face a devastating and additional onslaught - against some of our most valued public services in education, the NHS, local government, and so on.

But this is just the tip of the cuts iceberg. All the main parties are threatening to sink further what remains of a welfare state and public services after the general election.

"No cuts to the NHS" under New Labour turns out, as with almost anything they say, to mean the opposite. The government's NHS spending freeze means actual cuts of around £20 billion nationally. £2.25-£3 billion of that will fall on the north west, with £950 million to be cut in Greater Manchester.

Figures for the rest of the region have yet to emerge. It is clear this means far deeper cuts than even the previous assaults on our health care.

According to the Manchester Evening News on 8 March "...a leaked letter reveals NHS North West have ordered health bosses to draw up plans for: 10% cuts in primary, community, acute and mental health sectors by 2013. 15% cuts in acute and in-patient mental health care by 2013. 10% cuts in demand for hospital care by next year. Slashing management costs by 15% over four years. It also instructs managers to scrutinise pay and staffing levels in a bid to cut costs."

How on earth is hospital demand to be cut by 10% in 12 months? Workers should note the explicit threat to jobs, and to pay as soon as the current three-year deal expires.

The cuts are already being implemented. Bosses at Stepping Hill hospital in Stockport, Greater Manchester, attached a letter to workers' February pay slips asking for 10% voluntary redundancies. Adding insult to injury, the letter suggested volunteers might like to use their time out-of-work for holidays abroad! If, as seems possible, one in every ten staff do not volunteer for redundancy, what will management do then? Will they forcibly cut working hours, or move to compulsory redundancies?

On the other side of the region, the NHS trust on the Wirral, Merseyside, aims to cut 30 staff including nurses to "save" £13.75 million this year, £12.5 million next year, and £12.5 million the year after that, according to the Liverpool Daily Post on 18 March. Public services in the area are already being decimated by the council, and anti-cuts activists will need to resume a campaign of mass action to resist these attacks.

Thousands of jobs being lost in local government this year has been mirrored in a drip-drip of higher education redundancies in Greater Manchester and more widely. These were met with protests at Salford university last year and an ongoing battle at Manchester Metropolitan university (MMU) since last autumn.

At MMU, Unison union recently gained a 3:1 vote for industrial action in a consultative ballot, and are now ballotting for strike action. Protest actions there continue.

Now MMU is to lose an incredible £6 million-plus from the teaching budget, and overall funding is to be cut by at least 3% in real terms, depending on inflation. As we and others have warned, the 127 jobs under threat now are the not-so-thin end of a huge wedge of job losses. Management will seize on the £6 million cut to ramp up their attacks on jobs and may well widen that beyond support workers to include academic staff.

Over £12 million is to be cut from universities' teaching budgets in the region, almost enough to fund a small university for a year! This is the net cuts figure, adjusted for a few universities receiving headline increases which will be swallowed up by inflation.

Across their entire budgets, including research and capital spending, once inflation is taken into account, then every university in the region faces at best a spending freeze. Most face significant real-terms cuts. This will mean a worse education for students and widespread threats to jobs.

A motion recently passed by Manchester university UCU lecturers' union committed the union to fighting cuts, opposing attacks on anti-cuts protesters and giving full support to other unions taking action against cuts. The motion's proposer is a Socialist Party member.

Socialist Party members in the north west are involved in developing a campaign plan of action in Greater Manchester against the assault on our NHS. We, alongside others, will seek to link together the struggles to defend jobs and services in the widest and strongest possible movement to beat back the axe-men and their pro-billionaire political masters.

Trade unions and campaign groups need to be seriously prepared for a no-holds-barred struggle to defend jobs and services. This needs to be part of a national struggle by all the public sector unions, alongside those already taking action, and anti-cuts campaigns.