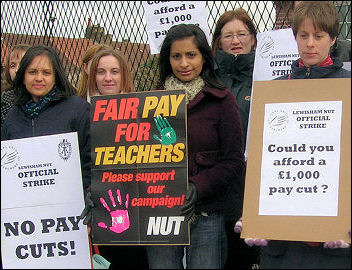 The National Union of Teachers (NUT) annual conference, which took place in Liverpool over the Easter weekend, showed that the conditions teachers now face are similar to those of workers across the public sector where pay and conditions are being eaten away.

The most anger has been shown over the issue of workload. For a number of years teachers have had to mark unnecessary tests along with unnecessary grading work and checks on children, resulting in work taking up evenings, weekends and holiday time. A report has shown that teachers are now doing 18.7 hours of extra work a week, meaning that they are in effect working the first four months of the year for free.

In 2008 and 2009 the conference voted for a national ballot on action over workload, up to and including strike action. However, in both years the union executive did not carry out the resolution. An amendment was passed with this year's motion on workload, which calls for preparation for a ballot to start now and for the ballot to begin on 19 April when the summer term starts and support should be built for action.

The resolution was passed unanimously, so now teachers have to wait to see what the leadership will do. Though there is a 'left' majority in the union leadership, it does not automatically mean that they will actually implement the decisions of conference.

Some of the debates on workload incline towards individuals saying: 'I'm not working any longer, I've done my contractual hours and I'm going.' However, because of the levels of bullying, it has been pointed out that it would be better for teachers to take national action together.

Other issues raised at the conference included over-sized classes and the continual privatisation of education in terms of academies, the so-called 'free school' policies that mainly benefit middle-class people and other initiatives that attack state education.

Another conference issue has been supply teachers, showing the casualisation taking place in schools where 10% of the teachers are supply staff working for agencies who are not paid the full rate for the job. One conference speaker demanded that supply teachers must be unionised immediately and given the rate for the job, and that the union has to fight to stop 'teaching on the cheap'.

On 16 April the outcome of the ballot against SATs tests will be announced. However, the ballot has only been for head teachers and deputy heads in the NAHT and NUT. The action is only at the level of heads not opening test papers. Ordinary classroom teachers have not yet been balloted, and most of these teachers do not know that this protest is going on. Many teachers are angry that they have not been encouraged to take part in action over SATs.

A Trade Unionist and Socialist Coalition (TUSC) meeting took place in Liverpool during the conference which was attended by 60 people including TUSC candidates in the audience as well as on the platform. Alex Gordon, the recently elected RMT rail union president who spoke at the TUSC meeting, was also available to speak at the teachers' conference particularly about the court injunction that stopped the RMT strike planned for 6-9 April, but the NUT executive turned that offer to speak down.

Socialist Party member and Lewisham, south east London, teacher Martin Powell-Davies, recently elected to the new union executive, spoke at the conference on a motion against cuts by whichever party leads the next government.

At the Liverpool TUSC meeting (see main article), held during the NUT conference, TUSC candidate in Manchester Gorton and Socialist Workers Party member Karen Reissman called for 'one left candidate' in the Unison general secretary election. However, it was clear that by this she meant supporting Labour Party member Paul Holmes who supports continued Unison funding of New Labour.

All TUSC supporters should support Roger Bannister in the Unison election, a Socialist Party member who has consistently called for a break of Unison with New Labour as part of reclaiming the union as a democratic organisation that fights for its members.