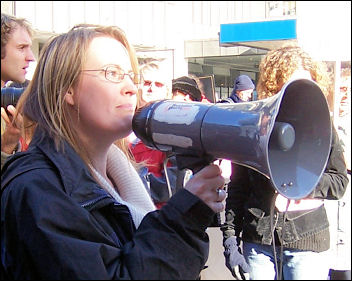 In 2006, Jackie Grunsell was elected as a councillor with a big majority following a high profile campaign to stop NHS cuts in Huddersfield. She had become a well-known public figure in the town and was elected as a 'Save Our NHS' candidate.

Four years later and we were once again asking for support for Jackie, but this time as a TUSC candidate. It was almost like starting all over again, except that Jackie has been, without doubt, one of the most active fighting councillors Huddersfield has ever seen.

We started canvassing in January but had prepared the ground with door-to-door work in the summer and a constant stream of hand delivered newsletters. We were trying to reach an electorate of just over 13,000 people, 6,500 households. We managed to canvass the entire area not once, but twice, and in some parts, three times!

Those that remembered Jackie, those who followed her work as a councillor, and those she had personally helped, remained as loyal as ever. We had six times as many window posters for Jackie than all the other parties put together. However, with the general election on the same day, a large majority were thinking about national issues when it came to making up their minds.

This was summed up by one voter who said: "I'm a Labour supporter and I want to stop the Tories so I'm voting Lib Dem." She said she would otherwise have voted for us! Many were equally confused. This was not unique.

Up until election day, we were confident of being in with a very good chance. Support on the streets and on the doorstep was excellent and our vote was holding up well. We visited and revisited all those who pledged to vote for Jackie, but on the day, we were overwhelmed by the sheer number of voters who were focused on the general election.

On election day, our campaign was swamped by offers of support. We ran campaign stalls all day and had supporters near almost all of the polling stations. We ran a brilliant 'soup kitchen' to sustain everyone and managed to knock on the door of virtually every supporter in the evening who had not already voted. Our support was reflected in 60 Socialist newspapers sold on the day and many financial donations.

But politics is an unforgiving activity. People decided, many perhaps for the last time, to vote for the mainstream parties. A political tsunami of Greek proportions is coming to every household in the near future. No one can say they have not heard of a fighting alternative in our area and they will turn, in even larger numbers than in 2006, to our banner when they have cast off their illusions in the three main parties.

In the meantime, over 25 people have applied to join the Socialist Party (three have already joined); 440 papers were sold in the campaign and we had one of our largest ward-based public meetings. A campaigning tradition has been forged in Huddersfield, which will be built on further in the near future.