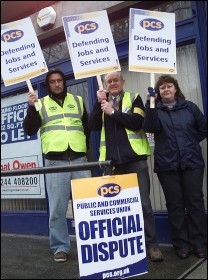 The general election has produced a hung parliament. One thing is clear, whoever forms the government has no mandate to carry out the savage spending cuts planned by all the establishment political parties. They want to make working people pay for the failure of the banks and the unrestrained free market.

Another election was taking place during the general election which saw the Democracy Alliance in PCS win the PCS national executive committee elections for the eighth consecutive year. This is a tremendous endorsement of our campaigning record that has done much to protect members' interests in the face of an unprecedented assault on the civil service. It is a clear mandate to oppose the massive cuts and privatisation programme.

The impact of proposed spending cuts and the expected "outsourcing bonanza" that has the profiteers salivating would be a catastrophe for society. It would mean potential public sector job cuts of 500,000, a 30% expenditure cut in the civil service and massive destruction of services. The most vulnerable in society will be driven even deeper into marginalisation and impoverishment.

Resistance to any such developments will result in huge industrial battles, social unrest and an intensification of the process of developing effective working class political representation.

No alternative to cuts?

We are told there is no alternative to cuts yet the richest increased their wealth by a staggering 30% in the last year and a recent report stated the gap between rich and poor is the greatest since the time of slavery. It is a scandal that the terms of the "debate", dictated by Cameron and the millionaire press and echoed by New Labour, is about the "un-affordability of public spending" rather than the anarchy and greed of the unregulated free market and the banks.

We reject the nonsense that "unaffordable" public spending is the problem. 74 pence in every pound of public sector spending goes directly back into the economy. The current establishment consensus orthodoxy is that public spending in itself is "wasteful" and a "debt", rather than a necessary investment in valuable services and jobs that provide the basis of a civilised society. This is deplorable.

The absence of any alternative to the cuts and privatisation agenda from the main political parties leaves the trade unions as the first line of defence for working people in defence of their jobs, services and communities.

PCS conference will reiterate our opposition to cuts and privatisation and assert the need for a coordinated and united fightback with joint campaigning by the whole trade union movement. These campaigns must reach into our communities and build the widest possible alliance in society.

This means creating a public sector alliance at all levels, building the strongest possible workplace organisation and establishing links between unions at branch, town, city and national levels. Regional conferences of public sector workers must be organised, trades councils built and supported, and demonstrations organised.

Fighting separately will leave workers vulnerable. Any idea there can be any trade-off between 'deserving and undeserving' public services must be firmly rejected - no to cuts and privatisation must mean precisely what it says if we are to succeed in stopping these attacks.

The TUC must stop acting as a counselling and arbitration service and give the kind of committed lead that the main political parties give to their big business masters. Whoever forms the next government will aim to rip the heart out of the public sector. The TUC must therefore urgently organise a national demonstration of all public sector workers in defence of jobs, living standards and services as a step toward joint public sector industrial action.

PCS will be at the forefront of fighting the cuts and, critically, demanding a real alternative, based on our conference policy:

The failure of the banks and free market and the consensus amongst the political establishment that there is no alternative to the market is an opportunity to argue and build for a real alternative. That is a society based on equality and fairness where people come before profit.