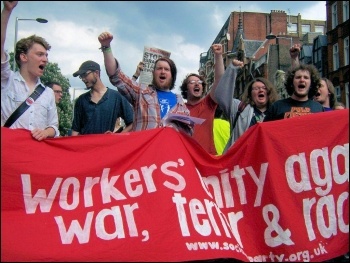 ANOTHER GRISLY milestone has been reached in Afghanistan: over 300 British soldiers have now died, since the war began in 2001. The average age of those killed is 22.

No such records are kept of civilian deaths in Afghanistan. It is estimated that thousands of Afghan civilians have been directly killed due to military action, including use of air strikes by the US forces. As well as this, possibly tens of thousands of Afghan civilians have died indirectly from the war, as a consequence of displacement, starvation, disease, exposure, lack of medical treatment and violent crime.

The fact that the British forces' death rate this year is twice that of 2006 shows the UK and US's war plans are going awry in this unwinnable and unjustified war. This strategic failure lies behind David Cameron's comment at the recent G20 summit that British forces "can't be there for another five years."

US-led forces occupied Afghanistan in the wake of 9/11, supposedly to end al-Qa'ida terror but in reality to further the geo-strategic interests of western imperialism. The puppet, corrupt Karzai regime, propped up by 100,000 western troops, presides over mass joblessness and poverty which fuels the Taliban opposition.

President Obama's dramatic sacking of the US and Nato commander in Kabul, General Stanley McChrystal, brings into the open the US's military crisis in Afghanistan. The Rolling Stone magazine article that prompted Mc-Chrystal's dismissal indicated the serious divisions within the military and political establishment.

It is becoming clear that McChrystal's much vaunted 'counter-insurgency' strategy is failing. The Afghan conflict is now America's longest war - increasingly called 'Obama's War' - and has no end in sight. This is not lost on the troops on the ground. A soldier quoted in Rolling Stone comments to McChrystal: "Sir, some of the guys here, sir, think we're losing, sir."

Already the 'international mission' in Afghanistan has fallen back from "defeating" to "degrading" the Taliban. US and British strategists now talk of "scaling back objectives" and of trying to make deals with the reactionary Taliban.

This could see de-facto Taliban control over many of the southern provinces, with former Mujahideen leaders controlling the north. Or a Yemen-style 'solution', where a western backed government holds only part of the country. So much for the occupiers' stated aims of bringing peace, security and women's and children's rights to Afghanistan!

While the British coalition government carries out draconian austerity attacks on working people, billions are wasted on this war. Since 2001, over £12 billion has been spent, which could have built new hospitals and schools and funded grants for students.

Due to growing domestic opposition to the war in the US and Britain, Obama said July 2011 would see the start of US troop withdrawals from Afghanistan. But he has also said that US forces could remain in "significant numbers" - following the pattern in Iraq.

'Wars without end' are the only guarantees under the rule of imperialism and crisis-ridden capitalism. Working people and youth in Britain, the US, Afghanistan and internationally can only rely on their own forces and solidarity to successfully oppose wars and imperialism and to fundamentally change society.