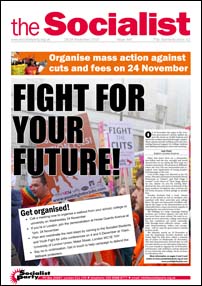 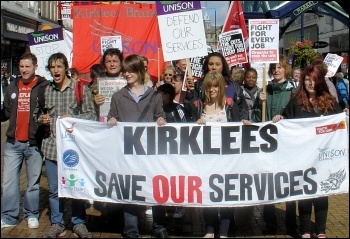 After months of delays and deliberation by the leadership of Unison both locally and regionally, Kirklees Unison has voted to ballot for strike action against cuts and redundancies.

Alongside the redundancies are plans to cut redundancy pay, to redesign all positions with related reductions in salary and to limit the time available on redeployment for employees whose roles are downgraded or abolished.

Outrageously, the council has continued to insist that sickness absence will be used when considering who should be made redundant and who should be retained; with no clarity whatsoever about how this would be applied. Kirklees staff are often too scared to be off sick, knowing that this could well be used against them in the future.

An extremely vocal meeting on 11 November of over 100 Unison members led to an enthusiastic endorsement of the need to strike. Socialist Party members spoke in the discussion and questioned why the union continues to donate massive sums of members' money to the Labour Party when this Labour council is attacking union members. This was met with rapturous applause.

However, Socialist Party members are entirely realistic about the difficult battles ahead. The council has managed to delay industrial action with various empty undertakings and broken promises.

Briefings have been held with workers during which management has drip fed a mantra of there being 'no alternative' to the cuts, said that frontline staff will be protected and that the union is exaggerating the scale of the cuts. Morale amongst council employees has weakened, with many workers feeling that the union has been too reluctant to fight and to stand up for members' rights and interests.

The Socialist Party will continue to support the strike committee and to convene workplace meetings. We will also hold campaigning stalls to engage with members of the public and to argue the case for industrial action.

A strong 'Yes' vote with a strong turnout will send a clear message to the Labour council and to the Con-Dem government that their determination to bury public services will be resisted and ultimately defeated.