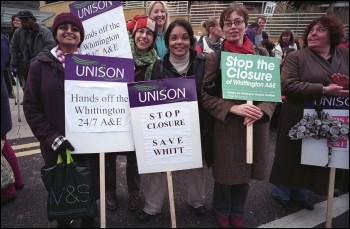 'EQUITY AND Excellence: Liberating the NHS'... so benevolently named is the government's car crash of a health bill which is going through parliament, that frankly there should be a health warning attached to it!

The name hides a devastating array of proposals which, if accepted, will see the destruction of the NHS as a health system.

No longer will it provide care, nationally planned, to meet the needs of each individual, without basing that on their ability to pay.

Instead it is to be replaced by a fragmented set of different health care providers competing to deliver care to another set of different commissioners, jostling to buy the services their particular patients need, with an ever-decreasing pot of money with which to do this.

The central principle of the bill is that 'any willing provider' can supply the services, including profit-making health corporations like United Health.

Primary care trusts (PCTs) and Strategic Health Authorities (SHAs) will be abolished from 2013 to be replaced by groups of GPs organised into groups called 'consortia'.

The government expects this will reduce spending on 'bureaucracy'. However the British Medical Journal estimates the cost of restructuring will be £2-3 billion for which extra funding is not being provided.

They claim GPs are best placed to make decisions about the needs of their patients.

While GPs are often very good at assessing the needs of their own practice populations they are not trained in public health nor do they generally have an overview of the health needs of an entire town or city, let alone a region or country as a whole.

Even if they did, on the basis of a reduction in NHS funding in real terms, GPs will simply end up being the ones who decide which services will be cut or rationed.

Of course it's inevitable that GP consortia will employ others to do their 'management' for them, a role for which private companies are champing at the bit. Control of the NHS's £100+ billion budget is the prize they've had their eyes on for some time.

Every NHS trust will become a foundation trust by 2013, taking it out of state control. When these trusts will no longer have a cap on how much they can earn from private patients, it's easy to see how NHS patients, not paying directly for care, could end up at the back of the queue.

What little accountability existed in the NHS is to be stripped away. There has been no public consultation on the government's proposals despite the fact that less than half of doctors think the government's plans will improve patient care.

The top-down drive to promote a market-driven health service will actually risk increasing the inequality in health between rich and poor. Those needing unprofitable, highly specialised or expensive treatments may well be asked to pay, or at least 'top-up' the funding available on the NHS.

Fortunately all health service trade unions seem to be united in their opposition to the government's plans. Of course, words are not enough when it comes to the very future of our NHS. Action is needed now before it's too late.

Health unions need to unite in organising industrial action against this attack. They should fight alongside community groups campaigning to defend services and come together to coordinate a national campaign to defend our NHS.