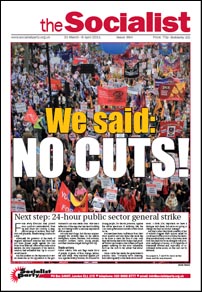 'Shame on you for turning Blue'

I thought we already had 'Blue Labour', given the complete acceptance by New Labour of the Tory Party's 'neoliberal' agenda and many of its social policies. But apparently it's not 'blue' enough! Behind BL is an attempt to shift Labour even further to the right on social issues and, in particular, a further attack on the welfare state.

In the internal debate about the future direction of the Labour Party a group has been formed around Maurice Glasman, recently appointed to the House of Lords by Labour leader Ed Miliband.

Glasman has previously been quoted as saying that Labour needs to 'return' to the values of "a deeply conservative socialism that places family, faith and work at the heart of a new politics of reciprocity, mutuality and solidarity".

On the programme he was supported by the likes of former Labour minister James Purnell. BL is being promoted as Labour's answer to Cameron's 'Big Society', yet another code word for cuts and privatisation.

In Labour's working class heartlands many voters have broken with their previously traditional party.

Instead of drawing the conclusion that this breakaway is because Labour carried out pro-big business policies, presided over the decimation of jobs, cut and privatised public services, and stopped representing working class people, BL looks for other solutions.

They quote the fears that many people have over immigration, for example, due to the scarcity of jobs and stretched public services.

But instead of answering those fears with a programme of creating jobs and homes, expanding services, and pointing to the real cause of those problems - big business and capitalism - they adopt a British National Party (BNP) style programme on immigration.

The rise of the BNP vote has everything to do with the abandonment of working class people by Labour.

The programme tried to categorise Labour's support as middle class graduates who were socially 'liberal' and concerned with equality on the one hand, and working class people, who were socially 'conservative' but were yearning for a return to community values on the other.

The former were apparently won over to Blairism, but it was the latter's fault that Labour lost the 2010 general election! What a false dichotomy!

Blairism brought us such socially 'liberal' things as clamping down on civil liberties and the 'war on terror'.

Of course working class people want equality - it reflects the middle class prejudices of the authors of Blue Labour to think they don't!

Not many people in either of those falsely separated social categories supported Labour's university tuition fees.

The proponents of Blue Labour have in particular attacked the post- 1945 welfare state as being 'bureaucratic'.

Instead they put forward 'mutuals, co-operatives and friendly societies, the creation of local banks and worker representation on company boards'. They want 'more localised provision of services, an end to Labour's obsession with post code lotteries'.

But this sounds to me like a token reference to genuine democratic control of services with an agenda behind it of further privatisation and break-up of services. The 'post code lottery' exists because of inadequate resources being put into local services.

In reality they are talking about the dismantling of services in the same way that the Big Society does, after all even Cameron talked of "cooperatives".

It is a comment on how far Labour has shifted to the right that Roy Hattersley, a solid right winger in 'old Labour' terms was brought on to criticise Blue Labour from the left! The working class does need political representation, but it will not come from the Labour Party. A new party of the working class is needed, one that opposes the capitalist agenda of cuts and privatisation of all the main parties.

The likes of Miliband can pose on demo platforms, but they are offering more of the same cuts, except 'slower'.

Blue Labour proponents bandy around words like 'solidarity' and 'community', but a real sense of solidarity and working class community will come out of the battles to defend public services we are now embarking on, and a real working class alternative to New Labour will be created out of those struggles.