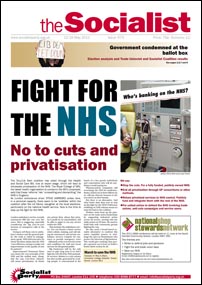 The library service I work for has been told to cut over £1 million. Immediately this has led to the cutting of overtime for staff and the effective scrapping of a casual pool of labour which we have come to rely on because of increased opening hours and the changing nature of the work.

My job is interesting and worthwhile but without enough staff it becomes more like an information factory.

We supply books to the elderly and disabled who are housebound. The reduction in casual workers has meant that we now have to deliver this service whilst serving people on the front counter. This means discharging, putting away, choosing and issuing books to over 80 people (all of whom want between five and 20 books each) and are waiting alone at home for this service.

Every day hundreds of people come to the library so we are now expected to serve those people and deliver the housebound service as well. It is common to have five groups of schools coming through the doors, that means five groups of 30 children bringing books back and taking books out.

There are 18 computers (which often break) and which people need assistance with. There's a book club that we have to read and prepare for, often in our own time.

We have seen a jump in unemployed people all wanting help to write their CVs and who have been directed to us by a cut and struggling job centre and careers service.

There's an increase of people with mental health problems in the library.

Council house bidding magazines are issued at libraries and now we are being expected to assist access to the bidding procedure. This can be stressful and time consuming, as essentially this process is a scramble for diminishing housing stock.

Last week a young African woman with two small children clutching at her skirt beckoned me over. She seemed embarrassed and said she wanted to talk to me privately.

She told me that she needed help in accessing charities that administered help such as children's clothing and food for herself and her girls.

I thought she might be a victim of domestic violence and was destitute so I took my time to help, all the time the queue building up on the other side of the counter.

With cuts to benefits we will be expected to direct people to the myriad of religious and philanthropic institutions to help them get food and clothing.

Before this cut to hours my library usually had four members of staff but it is common now for us to be left with three and sometimes only two. With two members of staff it's too dangerous to leave one person alone so we take our tea breaks on the counter, which often means we don't get a break.

After cutting all the casual staff the managers realised they couldn't keep libraries open over lunch times. So they arbitrarily decided to rip up a negotiated lunch time agreement.

This is because the chief executive said he was fed up driving past libraries and seeing them closed over lunch.

This hatchet man, who receives around £200,000, gets angry when he drives past workplaces where workers are taking a lunch break!

I am running a straw poll at the moment in our campaign to get a ballot from our union to sanction action that would allow us to defend our lunch break.

Even I'm surprised at the response. Over 75% of members said that if a ballot was called they would vote for action to close libraries over lunch times if we don't have enough staff to have our lunch break in the agreed time.

Union leaders say that people are too scared to take action but if workers are angry enough they will respond. There is seething anger on the frontline.

I'm angry all the time. This mood, if channelled would probably deliver a general strike now.

Without leadership this fight will be sectional, fractional and less effective. As well as fighting in our immediate workplaces and regions we can't let up on the pressure for a national generalised movement, much like the campaign for 26 March, only this time for action, strike action.

Strike action could bring down the government of millionaires and their lackeys in the town halls and hospitals.