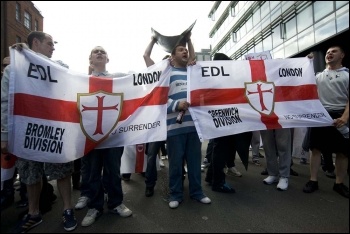 The racist and divisive English Defence League (EDL) had wanted to march through the streets of Tower Hamlets in East London on Saturday 3 September to create division and intimidate the local community.

But they were humiliated by the campaign against them. Despite the police ban on their planned march, they were still allowed a static protest. However, they could find no venue in Tower Hamlets that would have them!

Parks and public places were ruled out by the council; they were turned away by several pubs and from the Sainsbury's car park - no business wanted to be the target of a community boycott or of potential attack.

When they planned to "muster" at Liverpool Street station, the RMT in London announced that it would shut the station down on grounds of health and safety and once again the EDL were forced to change their plans.

Nonetheless, despite being thrown into disarray and demoralisation, 1,000 EDL supporters held their rally at Aldgate, just over the Tower Hamlets border in the City of London. 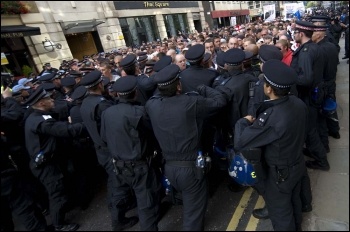 Disgracefully, despite the ban, they effectively marched, as they were escorted through the streets to Aldgate by the massed ranks of 3,000 riot police.

They rallied behind four lines of riot police and two lines of police vans that separated them from anti-racist campaigners on Whitechapel Road.

Their rally ended in chaos, with 60 arrests, when tanked-up thugs fought with police and threw racist abuse at local residents. 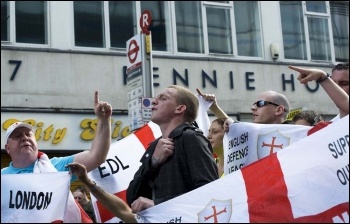 Outrageously, the counter-demonstration was also banned by the Home Office, in a sweeping ban on all demonstrations in five boroughs and the City of London for 30 days.

Nonetheless a static protest took place on Whitechapel Road which outnumbered the EDL. Anti-EDL protesters broke the ban on their march by moving down to Aldgate and then marching back up to the starting point.

Many ended their day in jubilation feeling that they had kept the EDL out of Tower Hamlets.

Unite Against Fascism (UAF) had a national mobilisation for this demonstration. Of course national demonstrations are an important aspect in any battle.

However, the EDL and BNP will not be defeated simply by a cat and mouse game of national EDL and UAF demonstrations staged in different towns around the country.

The EDL will start to be seriously defeated when local communities, workers and youth themselves organise to drive them out and to defend themselves. 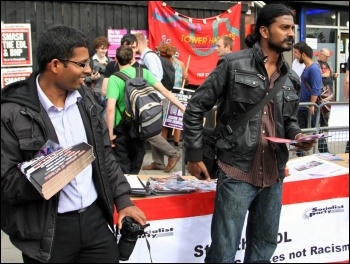 On the day, the East London mosque opened up its facilities to the public and the Islamic Forum of Europe provided 800 stewards to defend the community. The campaign was publicly led by the Independent Mayor, Lutfar Rahman.

Mayor Rahman was expelled from the Labour Party and elected as an independent, saying that he stood in the tradition of Poplar (Poplar councillors were jailed ninety years ago when they stood up for working class people against business interests under the slogan "better to break the law than break the poor") and Cable Street (in 1936 Mosley's British Union of Fascists was driven out by 300,000 workers and local people).

However, Rahman then presented to the council a budget with £75 million cuts over three years. All the parties on the council supported cuts to one degree or another.

These are exactly the conditions which create a breeding ground for organisations like the EDL.

In the campaign against the EDL he concentrated his energies on asking the Tory government to ban its march.

The Socialist Party warned that this could lead to the counter-demonstration also being banned.

Instead, we argued that Rahman and the council should have had a serious strategy of community defence.

The Mayor could have helped communities to organise estate-based contact networks to sound the alarm if any EDL supporters came near, so that residents could defend themselves.

This was the strategy pursued by the Socialist Party (then known as Militant Labour) and Youth Against Racism in Europe in the early 1990s when the British National Party were intimidating local people.

In the absence of any such serious community defence campaign, in the run up to 3 September Socialist Party members held several estate meetings, drawing people out onto their balconies to listen to speeches and discuss how to respond to EDL threats. 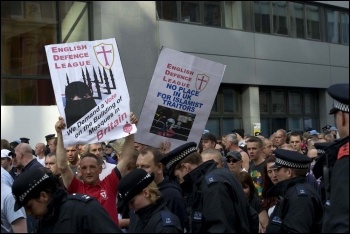 Tower Hamlets is one of the poorest boroughs in the country. Youth unemployment is almost 30%. Tory, Labour and Liberal politicians want ordinary working class people to pay for the economic crisis through massive cuts to public services.

Racist groups like the EDL exploit this crisis for their own ends. The conditions which can lead organisations like the EDL to grow can only be fought through united working class action.

This makes the fight against cuts and for jobs a crucial part of the battle against groups like the EDL.

Trade union leaders have a particular responsibility to act - not just to join in behind religious or community leaders, but to fight on a clear platform of working class unity against the cuts.

"Stand together against cuts and racism!", Matt Wrack, general secretary of the Fire Brigades Union (FBU) argued when he addressed the crowd on Saturday. "It won't be the home secretary, it won't be the courts" that stop the EDL, but "it's the ordinary people getting organised".

The FBU leader called on the councillors to fight and resist Tory cuts, instead of preparing the ground for division and poverty.

But unfortunately the emphasis of a whole range of speakers invited to speak by UAF was not to fight together against the existing conditions of working class people in Tower Hamlets and elsewhere, but to present fighting the EDL as a separate, single issue.

So when Mayor Rahman welcomed all protesters at the beginning, speaking of standing "shoulder to shoulder" against the EDL, he and his council - including Labour and Respect councillors - were left unchallenged for accepting and implementing the cuts ordered by the Tory government. 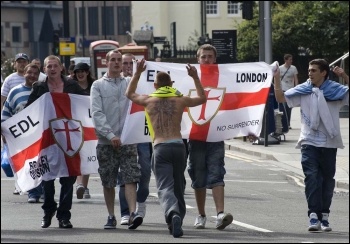 Not accepting this approach, Vik Chechi, Unison secretary at Queen Mary University (personal capacity) and member of the Socialist Party, speaking towards the end of the rally, stressed the need to stop all cuts and defend the public sector to be able to defeat the racists and build a strong and united answer to all attempts at divide and rule.

Vik called on the people at the anti-EDL protest to come to the lobby of the TUC on Sunday 11 September, called by the National Shop Stewards Network (NSSN) to put pressure on the TUC to coordinate a one-day public sector strike.

This version of this article was first posted on the Socialist Party website on 5 September 2011 and may vary slightly from the version subsequently printed in The Socialist.