Over 80 people attended the meeting, including Queen Mary students and local people who came to learn the lessons of their own local working class history, and joined by students and Socialist Party members from other parts of London.

Vik Chechi, Unison union branch secretary at Queen Mary (speaking in a personal capacity), explained how George Lansbury and 39 other Labour councillors defied not only the coalition National Government, but also the then leaders of the Labour Party.

The council, made up of dock workers, railway workers and socialists, coined the slogan 'better to break the law than break the poor'.

They refused to comply with the law until rich areas paid towards relief from London's poorer areas.

The council introduced equal pay for men and women in the council workforce, increased council jobs and organised a major programme of public works. Vik linked this to the fight against cuts at the university today.

The Poplar struggle was an inspiration to the 1983-87 Liverpool Labour council, led by supporters of Militant (forerunner of the Socialist Party).

Tony Mulhearn, one of the Liverpool '47' councillors who led the struggle, explained that they were prepared to put their personal property on the line for the struggle against the hated Thatcher government. 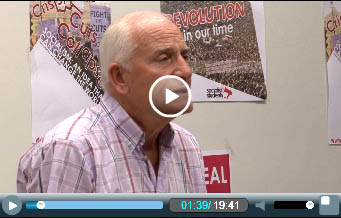 Tony explained how the language of socialism was turned into the language of bricks and mortar by the Liverpool 47 as part of their mass struggle that got £60 million funding returned from central government.

The councillors were not kicked out at the ballot box. Instead, they were forced out and fined by a coalition of the unelected district auditor, the courts and the Tories, with the support of the pro-capitalist, pro-cuts leadership of the Labour Party fronted by Neil Kinnock.

Suzanne Beishon, London organiser of Youth Fight for Jobs, spoke about another anniversary this October, of the 1936 Jarrow march, and the importance of this year's Jarrow to London March for Jobs.

Socialist Party general secretary Peter Taaffe was the final speaker. He explained how the impact of the Liverpool struggle set the scene for the mass Poll Tax non-payment campaign which defeated prime minister Margaret Thatcher and her hated tax. 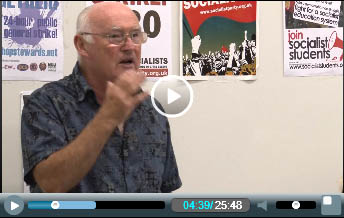 In a Militant-led campaign, 18 million people refused to pay, making the tax unworkable.

Peter also pointed out how the recessions that preceded these two famous struggles were an inevitable feature of capitalism just like the present economic crisis we see today.

He explained that these struggles led to important reforms for the working class, but "we need a socialist society to democratically plan and use the wealth and resources of society to permanently end recession and want".

A good discussion of some of the issues and their relevance today took place. Peter made a plea to the many "new faces" in the meeting to join with us and struggle for socialism.

Copies of the book Liverpool: A City That Dared To Fight were snapped up and £990 was raised in the fighting fund appeal.