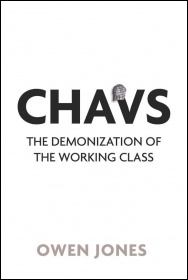 I have found all previous depictions of so-called 'chavs' in the media either totally offensive, such as the ChavScum and ChavTowns websites, or patronising. So I was a bit apprehensive about this book.

Owen Jones expresses his horror at hearing an anti-chav joke at a dinner party of left-leaning professionals, but he devotes the book to understanding why open hatred of the working class, through chav-bashing, has become socially acceptable for the right-wing media.

He explains how successive governments' neoliberal policies have devastated working class communities. The wholesale destruction of manufacturing industry provoked massive resistance from workers. But, thanks to the weak policies of the union and Labour leaders, the Thatcher government largely succeeded in decimating manufacturing industry, in an attempt to reduce the power of working people to collectively improve their lot through trade union struggle.

These policies, pioneered by the Thatcher government and enthusiastically continued by later Tory and Labour governments, have created widespread, long-term unemployment, and underemployment in working class communities around the country.

At the same time, they sought to blame unemployment and poverty on ordinary people. Margaret Thatcher famously said that there is no such thing as society, only individuals and families. Failure to 'get on' is seen more as the failure of the individual.

Along with police brutality and cutbacks in essential public services, these policies were among the underlying issues contributing to the eruptions of anger seen this summer.

The lack of a political voice for working people compounded the problem. Under the recent Labour government, most trade union leaders put up little resistance to the neoliberal policies of the party they supported and funded. Nor did they challenge the myth that individual working class people were responsible for their own misfortunes.

With little opposition to free market individualism, it is hardly surprising that journalists working for national daily papers, living in an elite bubble, felt confident to express their class prejudices.

As Owen Jones says, this is not just a matter of getting people from working class backgrounds into top media jobs. The question is, how do the mass of working people regain some power and a voice within society?

The unions have a key role to play in this process. Union membership may have fallen but union members staged the biggest working class demonstration on 26 March this year since the time of the Chartists. The specific weight of the working class in society has not changed. On 30 November, with plans for two to three million public sector trade unionists to be on strike, the power of the unions will become clearer.

But working people need a political voice as well. Clearly, Labour is not in a position to do this. 13 years of neoliberal government aside, there are not the mechanisms within Labour to transform it into a party that represents working people. Owen Jones himself says: "Such is the weakness of the unions that they ...repeatedly voted to renounce their own powers within party structures".

So the question becomes if not Labour then what? Alongside the RMT union, the Socialist Party has raised the need to build a political alternative to Labour, as part of No2EU in the last elections for the European parliament and then as part of the Trade Unionist and Socialist Coalition.

The Socialist Party has a proud tradition of campaigning around bread and butter issues in working class communities - not just during election times but all year round. Those serious about building a political vehicle for working class people must take up issues of cuts and privatisation, the lack of decent council housing and the absence of decent employment and training opportunities for young people.

We need to build vibrant campaigns in defence of living standards in workplaces where working people can directly challenge their employers, but also in our communities, putting forward anti-cuts candidates to contest elections, standing on a programme that champions pro-working class policies. Creating a genuine political voice for working people can counter the negative prejudices fuelled by the right-wing media.

Chav hate is class hate. Re-empowering working class people would not spell the end of class hatred - the ruling class will still attack the working class. But the Chav myth dangerously tries to divide sections of working people against one another. Better-paid workers are encouraged to accept the false idea that those who fail to get on only have themselves to blame.

This idea could fuel support for savage government attacks on public services, on benefits and ultimately, the living standards of all working class, middle class and unemployed people.

What is needed is a united fightback against cuts, austerity and the capitalist system that we live under, which siphons off the wealth created by the majority to line the pockets of a few.

Owen Jones will be speaking at Socialism 2011 in the 'Riot, reaction and resistance - what future for young people?' session - see advert