As a gesture to battling rising youth unemployment, the previous Labour government launched the Future Jobs Fund (FJF) in 2009. The scheme was very limited, offering nowhere near enough places to make a significant dent in youth unemployment and not being available to 16 and 17 year olds. There was also no guarantee of a permanent job at the end of the six month placement.

However, the Con-Dems have even scrapped this limited scheme in favour of more exploitative measures. Here, Patrick Timson who took part in the FJF, comments on this. 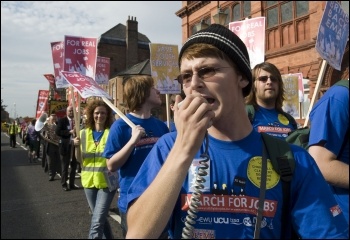 Having been one of the final people to benefit from the FJF I am left with little hope for an adequate solution to youth unemployment under the Con-Dems. When 25% of young people are leaving school having never received any careers advice, it is clear that we need more than just cheap ways of disguising the lack of real jobs available.

The FJF offered young people the chance to earn the minimum wage for six months. In order to receive funding the job had to benefit communities. The confidence and self worth I personally gained clearly weren't a consideration in the Con-Dems' new proposals.

The £1 billion FJF is gradually being replaced by a £60 million package to create apprenticeships, offering a minimum of just £2.50 an hour, as well as unpaid work placements within private firms.

There is even talk of tax breaks for those businesses with the 'decency' to employ young people. The government's hopes of the private sector alone seeing us through the increasingly unstable financial crisis do not reflect the reality of an economy which has rapidly come to a halt over the last year.

When will the government acknowledge the worth of young people as workers with unique skills and experiences and not just another embarrassing statistic?