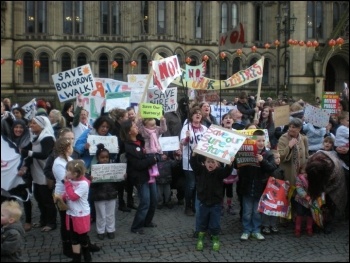 Protest against closure of Sure Start centres across Manchester, photo Manchester Socialist Party   (Click to enlarge)

Campaign continues fight to save childcare

All 39 Sure Start centres in Manchester have been saved following a mammoth year-long battle by parents and staff against the council.

The centres have been guaranteed funding and current levels of staffing for the next two years. A Save Manchester Sure Start campaigner, who is also a member of the Socialist Party, spoke to Hugh Caffrey.

What does the council's announcement mean?

It means that Sure Start is staying open and will continue to deliver the services it's delivering at the moment.

It's going to be universal, and so available to all families no matter what your income is. One of the things I'm pleased with is that Sure Start since it was established hasn't really met the needs of the hardest to reach groups, and so by having a more targeted approach and a more assertive outreach approach, it's going to reach more of those groups, and so it can be held more accountable.

At the beginning the plan was closure, then it moved onto outsourcing - this is like Plan Z for the council! The most significant thing is that it's remaining under council control and will be run by council staff.

Manchester is one of the most deprived cities, top of the league tables for child poverty, for kids not ready for school and so when they get there they fail, for kids from low-income backgrounds who when they're older fail as adults.

It really shows the importance of Sure Start for making those things better. Another key thing is that families who need support the most can get that, and other services they might need as well, all in one place through Sure Start.

So is this a victory for the campaign?

Yes, it is! It's a massive victory in terms of Sure Start staying open and staying under council control where I believe you've got staff who are better trained, on better terms and conditions, and who are dedicated to the service, compared to the private sector. But there is the issue of childcare.

How has the campaign made the council get to this point?

From day one, the council leadership thought the idea of 'consultation' was to say "There is no alternative, we're skint!".

So the first thing was to get real consultation. The council go on like they're doing the world a favour with consultation, but they wouldn't have had one if it wasn't for the campaign! And while the consultation has been going on, they've had to keep Sure Start running 'business as usual', so it's a full year that Sure Start has had to continue.

Every few weeks they've had to have meetings with us, because they've been badgered into it. I think at the start they thought we'd just go away, but we're a credible campaign and we know what we're doing including with the legalities, we know what we're on about!

What's going on with childcare?

The proposal is that the council will no longer be a direct provider of childcare, and that's a major blow because council childcare is cheaper than private childcare, and it's better-run.

Manchester council are proposing that parents that are going to struggle to stay in work because of the cost of private childcare can apply to a fund for support with childcare costs. Also this fund will be available for childcare for children with additional needs.

What's wrong with this proposal?

What's the criteria? What's classed as 'affordable' childcare? Public funds are going to be used to put pennies in the pockets of the already overly-paid private-sector childcare bosses. You'll have the 11% who are currently using council childcare, you'll have those in school nurseries where the council's proposals mean the hours provided are cut from 25 to 15 hours, and you'll have the funding for free childcare from the government - but the worry is that there's not going to be enough places for any of this!

What is the campaign doing about this?

We're going to the scrutiny committee, we've got a speaker there who's going to talk about the impact this is going to have, and the fact that two-thirds of Manchester residents are opposed to the council withdrawing from childcare.

Then we're lobbying the council executive. Then there's the trade unions, because this is also about people's jobs.

We need to get some leadership from Unison at Manchester council, to implement their own policies on childcare.

There's 500 staff working in council childcare, so that's going to be 500 jobs that are no longer in this city.

What are some of the lessons for similar campaigns elsewhere?

I think at the end of the day it's: don't give up! Make sure the council knows there's a big army behind you, and stick to what you set out to achieve, with clear reasoning.

Save Manchester Sure Start campaign actions:

More information: email [email protected] or go to "Save Manchester Sure Starts" on Facebook.